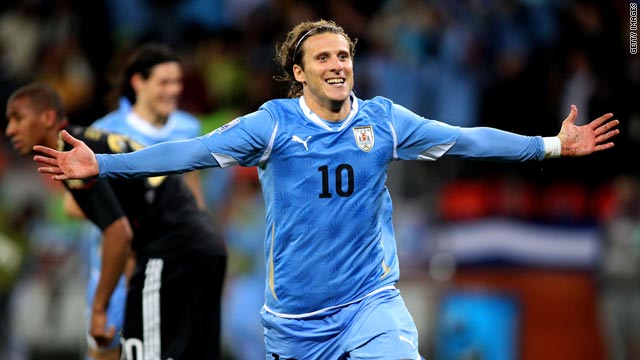 (CNN) -- Uruguay striker Diego Forlan has won the FIFA Golden Ball award for the top player of the 2010 World Cup after inspiring his country to its best performance at the global showpiece in 40 years.

"It's as great as it is unexpected," Forlan told governing body FIFA's website, revealing that his teammates reacted to his award by throwing him in the hotel swimming pool.

"I never even imagined something like this, nor did I have my sights set on it. I'm enjoying it and I'm delighted but I'm very aware that it's the result of the spectacular tournament the team has had."

Forlan ended a disappointing spell with England's Manchester United in 2005 to move to Spain, where he has twice finished as the league's top scorer.

He became the 2010 World Cup's joint leading scorer with a spectacular volley on Saturday before striking the bar from a free-kick in the dying moments of Germany's 3-2 victory.

Forlan's tally of five goals left him level with Sneijder, Villa and Thomas Muller, but the German forward claimed the Golden Boot award because he racked up a higher number of assists (three) than the others.

Muller, 20, who was instrumental in Germany's 4-1 demolition of England and the 4-0 thrashing of Argentina, was also voted the tournament's best young player.

He was suspended for the semifinal as Germany lost 1-0 to Spain but returned to score his fifth goal of the competition in the third-place playoff.

As well as the World Cup trophy, Spain will also fly home on Monday with the FIFA Fair Play Award after collecting only eight yellow cards in the tournament.

Spain's Iker Casillas was awarded the Golden Glove prize for the best goalkeeper after conceding just two goals in the tournament.