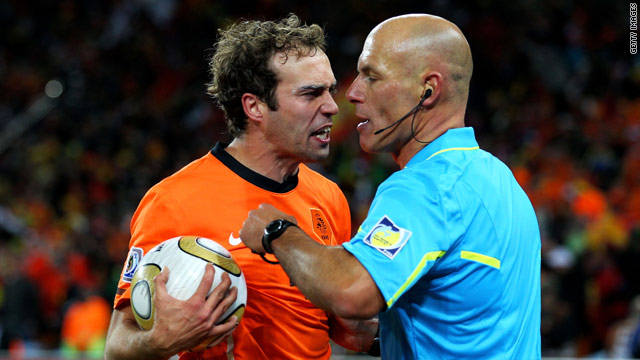 (CNN) -- Former English Premier League referees have jumped to the defense of Howard Webb after criticism of his performance in Sunday's World Cup final.

Webb, the first referee to officiate the European Champions League final and World Cup final in the same season, dished out 13 yellow cards and one red as Spain defeated the Netherlands 1-0 in a tempestuous clash at Soccer City, Johannesburg.

Dutch coach Bert Van Marwijk and several of his players suggested the English official favored the Spanish, and Netherlands fans booed Webb and his assistants when they collected their medals after the game.

But ex-referee Jeff Winter, who took charge of several fiery encounters between English giants like Manchester United, Arsenal and Liverpool, was full of praise for Webb's performance in extremely testing circumstances.

"I thought he had a superb game," Winter told CNN. "I find it very difficult to remember a more testing game than that at any level. I thought the players' behavior and discipline were abysmal.

"It was as if the Dutch had decided the only way they were going to stop Spain was by kicking them, harassing the referee and being obnoxious throughout.

"From a referee's point of view, if the players don't want to be controlled it's virtually impossible to control them. Had it had been a referee without his experience of the European game, they might have lost control within the first 30 minutes."

Webb's tally of 14 yellow cards -- including the red shown to Netherlands defender Johnny Heitinga in extra-time - was a record for the World Cup final.

Players from both sides flew into challenges from the first whistle and Dutch midfielder Nigel De Jong was fortunate to escape with only a yellow for a chest-high kick on Spain's Xabi Alonso.

It's not up to me to judge the performances of the officials, I can only say it was a very hard task that the referee trio had on the field of play
--FIFA president Sepp Blatter
RELATED TOPICS

"Howard will never, ever, if he lives to be 100, referee a tougher match," Dermot Gallagher, another former Premier League referee, told Sky Sports News.

"If you take the De Jong tackle out -- I thought that was a red card -- other than that I don't think he's got much to really look back in anger at himself, because he's gone out, he's been tested to the absolute limit."

FIFA president Sepp Blatter also defended Webb's performance, stating that it was "not easy" to control such a match.

"It's not up to me to judge the performances of the officials, I can only say it was a very hard task that the referee trio had on the field of play," he told reporters in Johannesburg.

The defeat was the Netherlands' third in a World Cup final, and several of the players made Webb the target of their frustration.

The official declined to dismiss Spain center-back Carles Puyol for a tug on Arjen Robben as he bore down on goal in the second half and failed to award a corner to the Dutch when a free-kick was deflected wide shortly before Spain's goal.

"There were some strange decisions and for me, honestly, if you play a World Cup final, you need a world-class referee," Robben said, the U.K. Press Association reported.

Van Marwijk said Webb had not controlled the match, while Liverpool forward Dirk Kuyt said: "I know you cannot blame others, but the referee favored Spain."

Winter, Webb's room-mate when he joined the Premier League circuit in 2003, has no sympathy for the Dutch.

"To listen to Dutch players after the game blaming the referee for the defeat after they conducted themselves abysmally for the whole two hours is unbelievable," he said. "I hope when they look back at what they've said they are totally and utterly embarrassed."