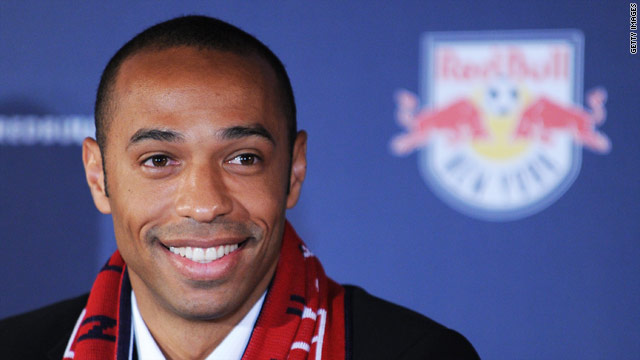 Henry confirmed his decision on the day he was presented as a New York Red Bulls player having signed a multi-year contract with MLS side after leaving Spanish champions Barcelona.

The 32-year-old scored 51 goals for his country but only made two substitute appearances as France were knocked in the group stages at the World Cup.

The squad returned in disgrace after refusing to train two days before a vital game but Henry says France's dismal showing had nothing to do with his decision.

"South Africa didn't play any part in it. My decision was taken right before the World Cup," he told reporters in New York.

"I could have announced my decision before the World Cup but I didn't want to put that kind of cloud on the team. I think it was time for me to stop after the World Cup.''

I could have announced my decision before the World Cup but I didn't want to put that kind of cloud on the team.
--Thierry Henry
RELATED TOPICS

Asked what went wrong at the World Cup Henry replied: "I actually would like to know myself. I don't know what it was.

"From a personal point of view, I am always going to respect the decision of the coach. It was [Raymond Domenech's] decision not to play me and I respect that.

"Lots of stuff was invented unfortunately. I just like to stick to the pitch, and the problem was we didn't play very well. That's the only thing we should be talking about right now. We didn't perform. It's as simple as that.

"We had a good atmosphere, but when you don't perform well it is difficult. For me, you can also have a lot of stuff happening when you win. We just didn't play well. I will stick to this.

"I think the team should move on now with Laurent Blanc in position as the coach, and hopefully they can qualify for the European Championships and do well in that competition.''

As for his move to New York, Henry said a switch to the United States was something he had been thinking about for "four or five months."

"I can assure you I have come here to try to win, that is the most important thing,'' Henry said. "I am a competitive person and I'm sure the boss can put a team out there to do it.

"I've met some people who came to MLS before and played for this club. I played with a guy you know well, Youri Djorkaeff, and know Claudio Reyna too.

"For me there was not any other option than New York Red Bulls. I wanted to represent New York. I love this city. It was a no brainer for me.''