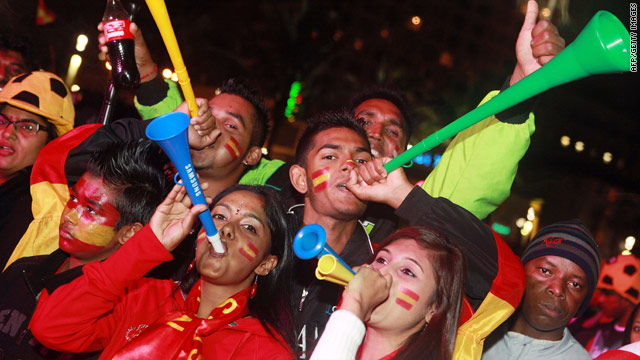 Spain supporters blow vuvuzelas at the Durban fan park ahead of the World Cup final on July 11.
STORY HIGHLIGHTS

(CNN) -- The noisy horns were one of the biggest talking points of the 2010 World Cup, but vuvuzelas are unlikely to take hold in British football stadiums in the upcoming season.

Eight English Premier League clubs have banned the South African instruments ahead of the August 14 kick-off of the 2010-11 campaign, calling them potential weapons, annoyances and a health risk.

Champions League qualifiers Tottenham were the first in the top flight to outlaw the droning plastic trumpets, following in the footsteps of several lower-league clubs.

"Following discussions with the police and representatives from the local licensing authorities, the club will not be permitting vuvuzelas or similar instruments into White Hart Lane on match days," the Londoners said on their website.

"We are concerned that the presence of the instruments within the stadium pose unnecessary risks to public safety and could impact on the ability of all supporters to hear any emergency safety announcements.

The best and worst of South Africa 2010

"We are very proud of the fantastic atmosphere that our supporters produce organically at White Hart Lane and we are all very much looking forward to this continuing into the forthcoming season."

"Further to their hugely debated involvement at this summer's World Cup finals in South Africa, Arsenal Football Club has decided to forbid the use of vuvuzelas within Emirates Stadium with immediate effect," read a statement.

"This decision has been taken to ensure the enjoyment and safety of supporters on match-days, which is of paramount importance to the club."

Another London club, West Ham, said vuvuzelas were ruled out under the health and safety regulations of their Upton Park stadium, which already bars musical bands.

"We would not allow them into the stadium as they could be considered a weapon and could also be considered to be an annoyance to others," read a Hammers statement.

"The health and safety regulation that all of this comes under is already in place. The club wishes at all times to ensure that all supporters are allowed to enjoy the game they are watching and prides itself on the passionate, loud and robust support from our fans at all matches at Upton Park."

History of the vuvuzela

Sunderland said it had similar policies about musical instruments at the Stadium of Light, while Liverpool, Birmingham, Everton and Fulham have also banned vuvuzelas.

However, the English Football Association has no plans to stop fans taking the horns to the national stadium Wembley, the UK Press Association reported on Wednesday.

England play Hungary in an international friendly there on August 11, while the traditional season curtain-raiser, the Community Shield, will take place at the London venue three days earlier.

Chelsea will likely be without goalkeeper Petr Cech, who suffered a calf injury in training on Tuesday.

The Czech Republic international is expected to be sidelined for about a month.