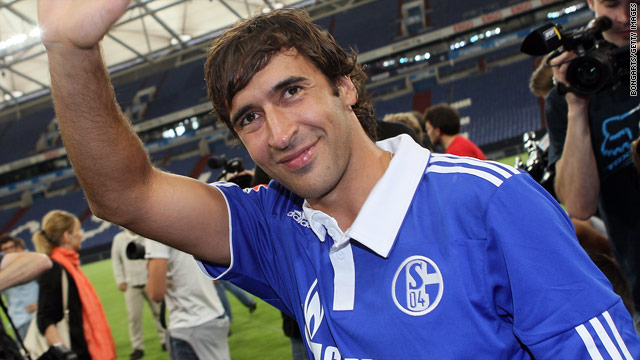 Raul greets fans at the Veltins Arena after completing his move to Schalke on Wednesday.
STORY HIGHLIGHTS

The 33-year-old agreed a deal until mid-2012 with the Bundesliga runners-up, joining on a free transfer after a trophy-laden 15 seasons at the Santiago Bernabeu.

He had hinted on Monday that he might join an English club, having been linked with Tottenham among others.

"It's great news for FC Schalke 04," coach Felix Magath told the club's website on Wednesday. "I'm delighted we've been able to inspire such an exceptional footballer and world-class striker to move to the Bundesliga and Schalke.

"Raul's qualities will help us move forward. His signing marks a decisive step in our efforts to strengthen and restructure our squad for the tasks ahead, and I look forward to working with such a likeable pro."

He is also Spain's record goalscorer with 44 from 102 appearances, though his last outing came in 2006 before his country's breakthrough triumphs at Euro 2008 and the 2010 World Cup.

The player, whose full name is Raul Gonzalez Blanco, has yet to receive a red card since making his first-team debut for Real in October 1994.

He is the third member of Real's squad to be released since Jose Mourinho took over as coach, with veteran midfielder Guti having joined Turkish club Besiktas and young defender Marcos Alonso sold to English side Bolton.

The 35-year-old's new wife is also from the North-East area, where Campbell will be reunited with manager Chris Hughton -- who worked with him as a youth coach when both were at Tottenham.

Arsenal's Denmark striker Nicklas Bendtner will miss the start of the new season due to a groin problem that troubled him at the World Cup.

The 22-year-old had surgery on the injury last November, but it has not been successful.