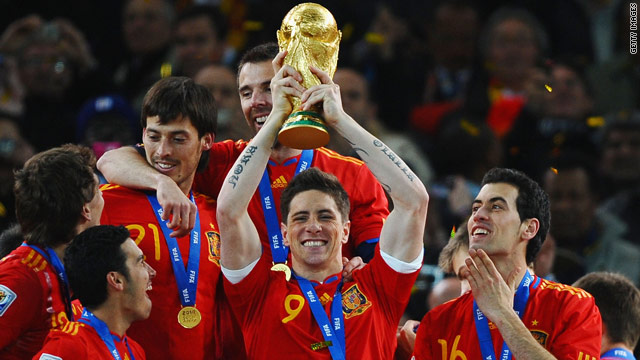 (CNN) -- Liverpool's star striker Fernando Torres has given the club a huge boost ahead of the new Premier League season by insisting he has no intention of leaving the club.

The Spanish forward's future has been up in the air since Liverpool slumped to a seventh placed finish last season, meaning they missed out on qualification for the European Champions League.

Torres was part of the Spain squad that won the World Cup in South Africa and has only recently returned to training with Liverpool. Rumors of a £50 million bid from Chelsea surfaced during the tournament.

But after captain Steven Gerrard committed himself to the club, and new manager Roy Hodgson strengthened the side with the purchase of England international Joe Cole, Torres has now said he is staying at Anfield.

He told the club's official website: "My commitment and loyalty to the club and to the fans is the same as it was on my first day when I signed. I am looking forward to the challenge ahead.

"This is the best club in the country so the targets and expectations are always high. Hopefully we can stay at our level. At Liverpool the aim is to fight for every title.

Torres came on for the final stages of the World Cup final, when Spain beat Netherlands 1-0, but picked up a groin injury seconds before the final whistle.

The 26-year-old says he is fighting to be fit for the start of the season, and Liverpool's opening game with Arsenal on August 15.

Torres also says he has been impressed with Hodgson -- the man who replaced Liverpool's former manager Rafael Benitez -- and appreciated the fact the 62-year-old traveled out to meet him when he was on holiday.

"I have less than two weeks to get ready but I felt really good in my first session back with the physios and the doctor," he said. "At the moment I am training just on my own but as soon as I can I will train with the team and with the new manager."

My commitment and loyalty to the club and to the fans is the same as it was on my first day when I signed.
--Fernando Torres, Liverpool
RELATED TOPICS

"I really appreciated the fact that Roy came out to see me while I was on my holidays. He told me about his plans for the club and what he wanted from me and I appreciated that.

"I hope he will be the right man to reach the targets of Liverpool Football Club and I am really looking forward to working with him."

Torres also welcomed the signing of Cole, who joined on a free transfer after leaving Premier League champions Chelsea in June.

"His passing is unbelievable so hopefully he can start the season well because I am sure he will be a key player for us. I'm excited about playing with him and hopefully we can all help him settle into the team and the city to make sure he can reach his best as quickly as possible."

Torres also paid tribute to Liverpool's fans and repeated his desire to help end the club's run of 20 years without winning the league title. He said: "I felt at home from the first day, I feel the fans love me and everyone knows I am really happy here and really happy to play at Anfield.

"I know that one trophy here at Liverpool -- maybe the Premier League -- means more than three or four with another club. This was my target from the day I came and it's still my target. Hopefully this season we can feel this sensation here at Liverpool."