Maradona's Argentina replacement to be made after October meeting 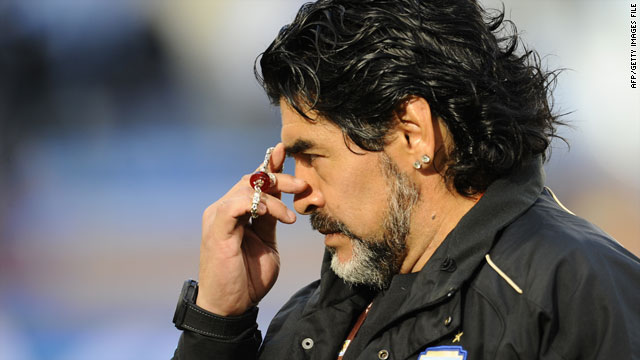 Diego Maradona took Argentina to the quarterfinals of the 2010 World Cup, where the team lost 4-0 to Germany.
STORY HIGHLIGHTS

(CNN) -- The Argentine Football Association will not replace outgoing coach Diego Maradona before October, it announced on Wednesday.

Sergio Batista, the coach of Argentina's under-20 team, will remain in temporary charge until then -- with his first match being the friendly against the Republic of Ireland in Dublin on August 11.

The former international player, who took Argentina's under-23 team to a gold medal at the 2008 Olympics, will also take the side for the prestige friendly against world champions Spain in Buenos Aires on September 7.

The new coach will be appointed after the AFA's annual meeting in October, the UK Press Association reported, and will take charge until the 2014 World Cup finals in Brazil.

Maradona's contract was not renewed by the AFA after he refused to make changes to his backroom staff following the 2010 World Cup, where Argentina lost 4-0 to Germany in the quarterfinals.

The 1986 World Cup winner accused AFA president Julio Grondona and general manager Carlos Bilardo of lying to him and betraying him.

"Grondona told me that he wanted me to continue as the coach, but that seven people from my coaching squad would have to go," the 49-year-old told reporters.

"That was impossible for me to agree to do. I have different codes and morals than they do; my parents taught me that."