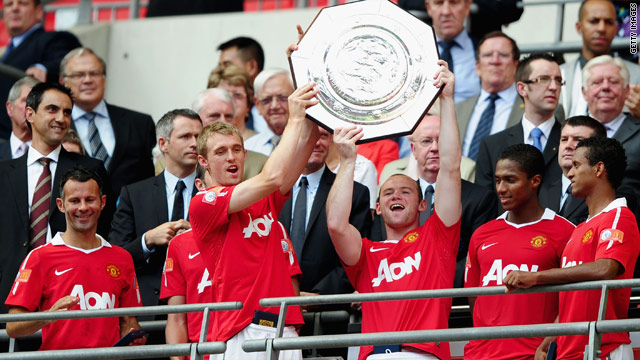 Manchester United got the English season off to a perfect start with a 3-1 victory in the Community Shield.
STORY HIGHLIGHTS

(CNN) -- Manchester United got their revenge on double winners Chelsea with a thrilling 3-1 victory in Sunday's Community Shield, the traditional opener to the English Premier League season.

United only had the League Cup to show for their efforts last season and had to watch as Chelsea plundered the Premier League and FA Cup to secure the first 'double' in their history.

But Carlo Ancelotti's side have had a series of poor results in pre-season and United were full value for their victory on a warm afternoon at Wembley.

United took the lead five minutes before half time when man-of-the-match Paul Scholes played a superb diagonal ball to Wayne Rooney on the right.

The England striker saw Antonio Valencia running into space in the center and he found his teammate with a perfect ball -- the unmarked Ecuadorian doing the rest by firing past goalkeeper Edwin van der Sar.

Both sides had chances to score in an open second half but the game became more and more stretched as legs began to tire in the August sun, resulting in three goals in the final 15 minutes.

Now we will celebrate and wait for our first league game against Newcastle next week. We have a great team spirit, we are like one big family.
--Dimitar Berbatov
RELATED TOPICS

Valencia turned from scorer to provider to double United's lead on 75 minutes, crossing from the right for new signing Javier Hernandez to bundle the ball home although the Mexican nearly fluffed the chance -- tripping over with the goal at his mercy and diverting the ball home off his face.

Chelsea fought back and reduced the arrears in the 83rd minute when substitute Daniel Sturridge ran at the United defense and his shot was parried by van der Sar to the feet of Salomon Kalou, who fired home from close range.

Chelsea powered forward looking for an equalizer but they left gaps at the back and Dimitar Berbatov made them pay in injury time with a brilliant lob over goalkeeper Hilario, in for the injured Peter Cech.

"It's my first goal of the season, so it's a really good day," the Bulgarian striker told Sky Sports.

"Now we will celebrate and wait for our first league game against Newcastle next week. We have a great team spirit, we are like one big family."

The winners of the Shield have gone on to win the league title for the last three years, with Chelsea beating United in the this fixture last year, and United will be hoping that sequence continues.