Can Magath move from 'torturer' to crowd-pleaser with Schalke? 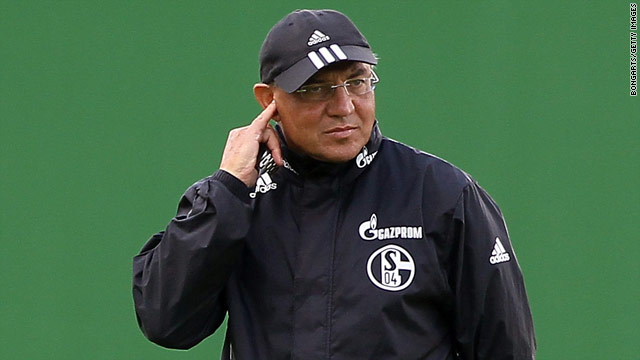 Felix Magath believes he can eventually win the Champions League for the first time with Schalke.
STORY HIGHLIGHTS

(CNN) -- Nicknamed "Saddam" and "The Torturer" due to his rigorous training regimes, Schalke coach Felix Magath is promising a more aesthetically-pleasing approach in the upcoming German football season.

Schalke surprised many pundits by taking the Bundesliga title race to the final week last season before conceding to Bayern Munich, but Magath told CNN that he will revamp the team's tactics in the new campaign, which begins with a trip to another of his former clubs, Hamburg, on August 21.

"This season we've changed some things, we've sold some players, and bought in some important new players -- so the squad is different," he said.

"We made it to second place, the squad worked and battled really hard -- but they didn't actually play that well, and that's something we want to work on. We want to play better football.

Schalke has all the prerequisites to be a top club internationally. My aim is to win the Champions League one day
--Felix Magath
RELATED TOPICS

"So for the new season, we'll be using a new formation with new players, so it's difficult to say whether we'll be able to contend for the title and fight for a Champions League spot again this year -- like we'd like to."

Schalke's marquee pre-season signing was legendary Spanish striker Raul, who Magath brought in from Real Madrid on a free transfer following the similar acquisition of his former clubmate Christoph Metzelder.

"Raul is a great player -- but he can't win games alone. He needs the right support. So I think it would make a lot of sense for us if we brought in another very good player in who would support him in the attack," Magath said.

"So we are still active in the transfer market and we are looking to sign up another attacking player. We had the luck that we had brought in Christoph Metzelder, who initiated the contact with him and I'm sure that will have been a factor in his decision.

"The other thing is, he has a team here that is developing, and as an experienced player he can definitely help a young team and I'm sure that that attracted him to the club."

Raul spent 16 years at the Santiago Bernabeu, where he won the Champions League and became Real's all-time top scorer.

"I've only been here a week but I'm really happy. The way fans and the other players here have welcomed me has been great. I feel really good here and I'm looking forward to working hard, to training," the 33-year-old told CNN.

"Now I want to spend the next two years enjoying playing the game, getting to know another culture, the Bundesliga, getting to know new teammates and methods. I want to enjoy each training session and each match. And I hope I can give them the best of me."

Magath's decision to attempt a more attractive style of football may surprise some people, as he is known as a ruthlessly hard-working, authoritarian coach -- hence his nicknames. One of them, "Qualix," is a mixture of his first name and the German word for torture.

"After the way he treated me, I think I could become a general in the Brazilian army," defender Rafinha told Sport Bild magazine this month after joining Italian club Sampdoria.

"We Brazilians upset him with the way we are. We have a laugh, we talk a lot, whereas he is calm and concentrated -- and above all he works in a way which is not really synonymous with pleasure."

He was once known as someone who could save struggling clubs from relegation, but now Magath has a well-earned reputation of a title contender.

His success at Schalke, where he has transformed a club crippled by financial problems, has mirrored the miracles he achieved in taking little-fancied Wolfsburg to the Bundesliga title in 2009.

"In the past I've been able to pull sides up from the bottom of the table, and take them to promotion or even the UEFA Cup," the 57-year-old told CNN.

"I do feel more comfortable higher in the table. I find the pressure much greater when I'm playing to avoid relegation. I am more afraid of failing when I know a club will have to live with sporting and financial consequences than I am afraid of not winning a title."

As a player, Magath was twice a World Cup runner-up with Germany, and he won the European championship in 1980.

His first management job was with Hamburg following a career in which he won the European Cup and the UEFA Cup twice, alongside three Bundesliga titles.

He was sacked in 1997 after two trophy-less seasons, and had short stints at Nuremberg and Werder Bremen before his stocks rose again at debt-ridden Stuttgart, who he took to second in the Bundesliga in 2003.

After three years with "Die Roten," he was named manager of Bayern, where he won an unprecedented two consecutive league and cup doubles before again being sacked in 2007.

Magath then took over a Wolfsburg side used to bouncing between Germany's top divisions, and led the team to a club-best fifth place in the Bundesliga and a spot in the UEFA Cup.

The next season was even more impressive, winning the title and a lucrative place in the Champions League, but Magath surprisingly left to take over a cash-strapped Schalke team who had finished just ninth in the league.

At both clubs he has taken the dual role of coach and manager -- a situation more common in England than with other European clubs.

"At both clubs I thought it was particularly important, because the team didn't just need coaching. In the first place, it needed to be built," he said.

Bayern on brink of Bundesliga title as Schalke slip up

"In Wolfsburg we only had 12 players, so I had to buy at least another 10 or 12 players. And it was the same here. The club had big financial problems. So you had to be working off the basis that we needed to ring in some changes that were going to take some time.

"When you're planning your squad -- and you have to make compromises with a manager -- that makes it really hard for the club to be successful. So I think it's best for the club when one man makes the sporting decisions."

Magath is contracted to Schalke until 2013, and has big plans in the city of Gelsenkirchen.

"Schalke is one of the biggest clubs in Germany and -- after Bayern Munich -- it has the best infrastructure. We have a great stadium, after Munich we have the second-most members, we have the most fans -- perhaps also the best, the most emotional fans -- so we definitely have the opportunity to achieve something here," he said.

"Schalke also has all the prerequisites to be a top club internationally. My aim is to win the Champions League with a team one day. And I think the chances of that here at Schalke are better than at other German clubs."