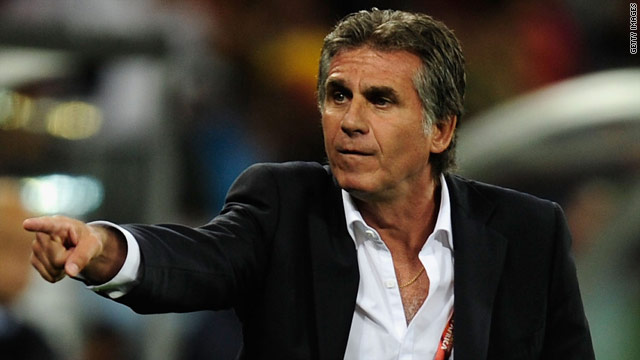 Carlos Queiroz has been coach of Portugal's national team since 2008, when he left Manchester United.
STORY HIGHLIGHTS
RELATED TOPICS

(CNN) -- The Portuguese Football Federation has banned national coach Carlos Queiroz for a month following an incident involving an anti-doping team before the 2010 World Cup.

The 57-year-old will miss next month's opening Euro 2012 qualifiers against Cyprus and Norway for his part in the confrontation when the drug test controllers visited Portugal's training camp in Covilha in June.

Queiroz had initially fought the charges, and brought in his former mentor Alex Ferguson of English club Manchester United as a character witness.

The former Real Madrid coach was also fined $1,280 for his part in the matter, as the FPF said on its website on Thursday that his "aggressive behavior" had disrupted the testing procedure.

The Ministry of Youth and Sport filed a report after the Sports Institute of Portugal complained about Queiroz.

He will now miss the home match against Cyprus on September 3 and the trip to Norway four days later.

Queiroz is under pressure to produce results, having needed to go to the playoffs to qualify for the World Cup and then losing to eventual champions and neighbors Spain in the second round in South Africa.

Portugal failed to score in three of the four World Cup matches despite being led by the world's most expensive player, Real's Cristiano Ronaldo.