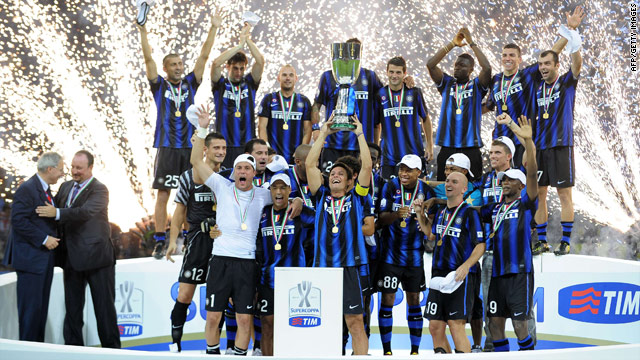 Inter Milan's players celebrate after clinching their fourth trophy this year with victory in the Italian Super Cup.
STORY HIGHLIGHTS

(CNN) -- Rafael Benitez made a winning start to his career as Inter Milan coach as the European champions beat last season's domestic rivals Roma 3-1 in the Italian Super Cup at the San Siro on Saturday.

Benitez, who replace treble winner Jose Mourinho after leaving English club Liverpool, saw his new team maintain their dominance over the capital outfit, who finished second in both Serie A and the Italian Cup in 2009-10.

It was Inter's fourth trophy of the year, with Cameroon striker Samuel Eto'o netting two goals to join Alessandro Del Piero and Andrei Shevchenko at the top of the all-time list of Super Cup scorers with three goals following last year's effort against Lazio in Beijing.

"I am very happy because we showed character after going behind," Benitez told the Inter website after his side equaled city rivals AC Milan's record of five Super Cup wins.

My boys weren't fresh, but they worked hard. We're hoping to be a bit fresher for the European Super Cup next week
--Rafael Benitez
RELATED TOPICS

"It's a title won by the players -- a title for them, the club and the fans. It was our first competitive match. It wasn't easy but we did it. The players did well. My boys weren't fresh, but they worked hard. We're hoping to be a bit fresher for the European Super Cup next week."

Inter take on Europa League winners Atletico Madrid of Spain in the European Super Cup next Friday, and kick off their Serie A season away to Bologna three days later.

Claudio Ranieri's Roma took the lead in the 21st minute in front of the 65,000 crowd through Norwegian defender John-Arne Riise, whose first-time finish from the edge of the penalty area was set up by captain Francesco Totti.

Krasic, 25, agreed a four-year contract and joins for a fee of $19 million.

"I received some proposals by Manchester City, Fenerbahce and other teams, but when I knew about the opportunity to join Juventus, I preferred to wait," he told the Juventus website on Saturday.

Juventus will also add Liverpool midfielder Alberto Aquilani to their squad on Monday if the Italy international passes a medical, having agreed a season-long loan for the 26-year-old.

Aquilani has struggled since leaving Roma while still recovering from injury, and new Liverpool boss Roy Hodgson said he hoped the player could restore his previous form.

Hodgson also ruled out any move for Netherlands World Cup star Dirk Kuyt, who has been linked with a move to Inter.

"I spoke to [Inter president] Massimo Moratti on Wednesday about the fact that they are not going to buy any Liverpool players, and Kuyt comes into that category," Hodgson told Liverpool's official website on Saturday.

Liverpool's future is still uncertain after Chinese businessman Kenny Huang confirmed on Friday that he had pulled out of the race to buy the club from American co-owners Tom Hicks and George Gillett.