Sevilla dumped out by Sporting Braga 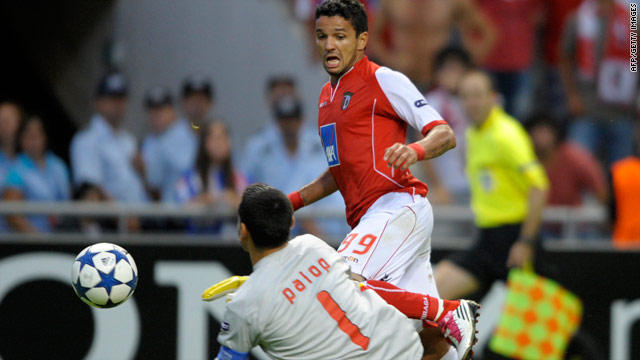 Brazilian striker Matheus was on target for Sporting Braga in their shock Champions League victory over Sevilla.
STORY HIGHLIGHTS

(CNN) -- Sevilla have failed to become the fourth team from Spain to qualify for the Champions League after crashing out to Portuguese underdogs Sporting Braga 5-3 on aggregate on Tuesday.

Braga won the opening leg 1-0 last week -- and they followed up that victory with a stunning 4-3 success at the Ramon Sanchez Pizjuan stadium.

A hat-trick from Rodrigo Lima and another from Brazilian Matheus saw the visitors progress to the group stages for the first time with Luis Fabiano, Jesus Navas and Frederic Kanoute on target for the Primera Liga side.

The result means Barcelona, Real Madrid and Valencia will represent Spain in this year's Champions League.

On a night of high drama, five places in the lucrative knockout stage were up for grabs.

And one of those spots has been taken up by Partizan Belgrade who knocked Belgian side Anderlecht out of the competition on penalties in Brussels.

After extra time, the teams were locked together at 2-2 on the night, the same score as the first leg in Serbia.

But, despite the home side recovering from two goals down to force the extra period, it was the visitors who held their nerve in the shoot-out, with Mbarek Boussoufa firing his penalty over the bar to give Partizan a 3-2 shoot-out win.

There was also a dramatic finale to the match in Genoa as Werder Bremen fought back from going 3-0 down to edge past Sampdoria 5-4 on aggregate.

The Bundesliga side won the first leg 3-1 but they were staring defeat in the face when two goals from Giampaolo Pazzini and a cheeky Antonio Cassano effort gave the home side a winning lead.

But, with just seconds left on the clock, Markus Rosenberg scored to send the match into extra time and Peruvian striker Claudio Pizarro netted again for Werder in the 100th minute to ensure their qualification despite losing 3-2 on the night.

Meanwhile, Israeli side Hapoel Tel-Aviv secured their place thanks to a 1-1 home draw with Austrian side Salzburg.

Hapoel have emulated compatriots Maccabi Haifa, who qualified for the knockout stages last year, with a 4-3 aggregate success meaning that Salzburg have failed at the same stage for the fourth time in five seasons.

The result means Basel have qualifed for the knowout stage for the third time in their history following-on from 2002 and 2008.