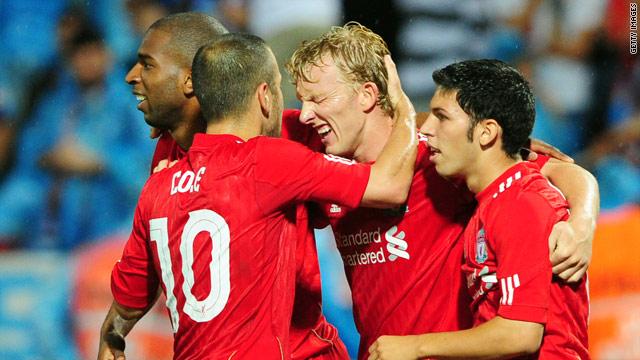 (CNN) -- Liverpool shrugged off conceding an early goal to beat Turkish side Trabzonspor 2-1 and qualify for the group stages of the Europa League with a 3-1 aggregate victory.

But Roy Hodgson's side drew level seven minutes from time as Trabzonspor's Giray Kacar turned a Glen Johnson cross into his own net.

Dirk Kuyt, at fault for the first goal, then added as second in the 88th minute when goalkeeper Onur Kivrak could only push out Joe Cole's shot into the Dutchman's path.

"A lot of people have said a lot of things about my future, but for me it is at Liverpool. I like it here at the club and I want to stay here and win things," Kuyt told Sky Sports.

He has been linked with a reunion with former Liverpool boss Rafa Benitez at Inter Milan.

It was a welcome boost for Liverpool after their 3-0 thrashing by Manchester City, who also reached the group stages with a 2-0 home win over Romanian side FC Timisoara at Eastlands, going through 3-0 on aggregate.

Shaun Wright-Phillips and Dedryck Boyata scored the goals for City.

But there was more disappointment for a third English Premier League side as Aston Villa, thrashed 6-0 at the weekend by Newcastle, lost 3-2 at home to Austrian side Rapid Vienna.

Villa went out of the competition to the same opponents last year and had expected to reverse that result after drawing 1-1 away in the first leg.

Juventus, who like Liverpool and Villa are former European champions, eased through with a 1-0 home win over Sturm Graz of Austria in Turin after leading 2-1 from the away leg.

But it was a disastrous night for Scottish clubs with Celtic crashing 4-0 away to FC Utrecht with Ricky van Wolfswinkel scoring a hat-trick.

Celtic had led 2-0 from the first leg.

Dundee United lost out to Greek side AEK Athens and Motherwell exited to Odense of Denmark.