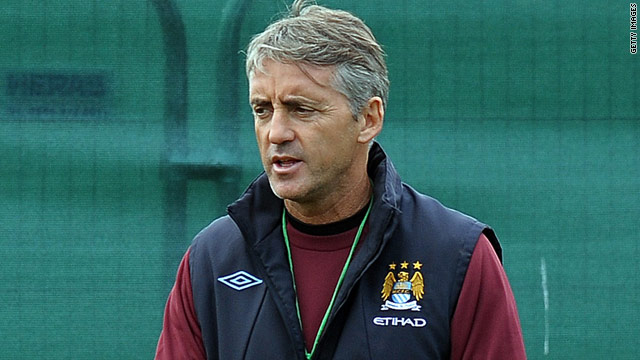 (CNN) -- Roberto Mancini will take Manchester City back to his homeland after the English club were paired with Italian giants Juventus in the Europa League draw.

The Italian was coach at Inter Milan for nearly four years, leading them to three successive titles, before taking over at City in December 2009.

It also means a return to Italy for new City striker Mario Balotelli, who was signed from Inter earlier this month. The other two teams in Group A are Austrian champions Salzburg and Polish side Lech Poznan.

Elsewhere, defending champions Atletico Madrid, from Spain, have been paired with German club Bayer Leverkusen, Rosenborg, from Norway, and Greek side Aris Thessaloniki.

Spanish side Sevilla, who were knocked out of the Champions League in midweek, have been drawn with Paris Saint Germain, of France, German side Bayer Leverkusen and Karpaty, of Ukraine.

Liverpool will play Italian side Napoli, Steaua Bucharest, of Romania and Utrecht, of the Netherlands.

Their captain, Steven Gerrard, says he fully expects the club to be installed as favorites to win the competition. He told the club's official website: "It's a strong group and I'm certainly looking forward to the games.

We haven't won a trophy for four years so it's important we put a good show on in all the cup competitions
--Steven Gerrard, Liverpool captain
RELATED TOPICS

"The media will make us early favorites I'm sure, because of our experience in the Champions League and last year in the Europa League. I'm confident we can get out of the group but it will be tough. The draw has given us some difficult challenges.

"But it's another trophy, it's a big cup. We haven't won a trophy for four years now so it's important we put a good show on in all the cup competitions and try to reward the fans with a final."

The Europa League draw in full:

The first group games will be played on September 16.