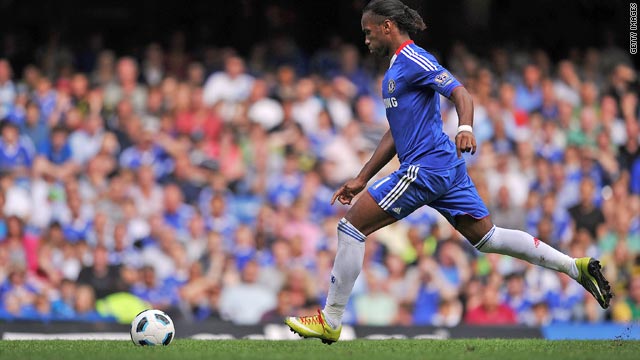 Chelsea's Didier Drogba was on target again in the 2-0 win over Stoke City at Stamford Bridge.
STORY HIGHLIGHTS
RELATED TOPICS

(CNN) -- Chelsea have maintained their 100 percent record in the English Premier League with a comfortable victory over Stoke City.

After scoring 12 goals in their opening two English Premier League fixtures, Chelsea had to settle for just two at Stamford Bridge on Saturday.

Goals in either half from Florent Malouda and Didier Drogba -- the Ivorian's fourth goal this season came from the penalty spot -- was enough to see off Stoke City and gives the English champions a two point lead at the top of the table after only three games.

Having secured their passage to the Champions League group stages in midweek, Tottenham returned to Earth with a bump against Wigan losing 0-1 at White Hart Lane.

It was a far cry from last season when Harry Redknapp's side thrashed Wigan 9-1 in the corresponding fixture.

A late goal from Hugo Rodallega secured Wigan's first points of the season, and will surely lift some of the early season gloom engulfing Roberto Martinez's men who shipped 10 goals without reply in their opening two matches.

Despite having most of the possession, Arsenal found another goal hard to come by. But a typically robust Blackburn side were undone when Arshavin's low shot found a route to goal through a crowd of Blackburn shirts, to seal the three points. The victory lifts Arsenal to 2nd in the table.

Manchester United cruised to a 3-0 victory over West Ham at Old Trafford.

Wayne Rooney opened the scoring after 33 minutes -- and his account for the season -- when he converted from the penalty spot after Ryan Giggs had been fouled by West Ham's Jonathan Spector.

Nani and Dimitar Berbatov added two more goals in the second half. The result lifts Alex Ferguson's team to third in the table, level on points with Arsenal.

Meanwhile, West Ham remain at the bottom of the table without a win to their name and a goal difference of minus eight.

Ian Holloway's Blackpool side were moments away from their first home win of the season against Fulham only to be denied by a late equalizer from Dickson Etuhu.

Striker Bobby Zamora gave Mark Hughes' side the lead after 35 minutes, but Blackpool struck back with two goals in five minutes midway through the second half courtesy of an own goal from John Pantsil, followed by a low drive from Blackpool's on-loan striker Luke Varney.

The result means Blackpool remain one point and one place ahead of Fulham in the table in 10th spot.

Wolves and Newcastle drew 1-1 in a tight game at Molineux. Sylvain Ebanks-Blake gave the home side the lead shortly before half time.

But in-form striker Andy Carroll equalized for Newcastle after 62 minutes when he headed home a Joey Barton free-kick. The draw keeps Wolves (five points) a point ahead of Newcastle in the table.