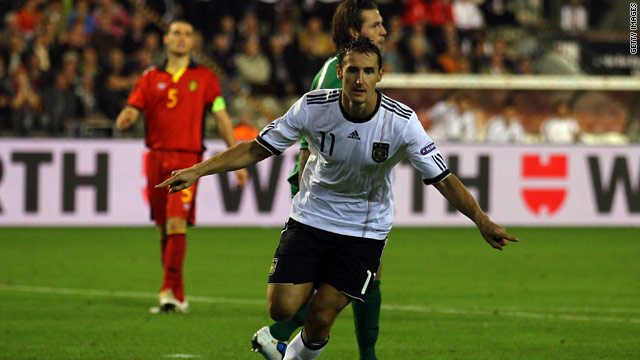 Miroslav Klose scored the only goal as Germany began their campaign with a narrow victory in Belgium.
STORY HIGHLIGHTS

(CNN) -- Miroslav Klose scored the only goal of the game as Germany's exciting young side began their Euro 2012 qualifying campaign with a 1-0 Group A win over Belgium in Brussels.

Klose showed his lethal goalscoring instincts in the 51st minute when slotting the ball past goalkeeper Logan Bailly after Thomas Mueller had taken advantage of a mistake in the Belgian defence.

Despite the result, Germany are only second in the group behind Turkey, who cruised to a 3-0 victory in Kazakhstan.

With a host of influential players not available to Blanc, the visitors snatched the points with four minutes remaining when substitute Sergei Kislyak fired home.

In the other group matches, Edin Dzeko was among the scorers as Bosnia won 3-0 in Luxembourg, while Albania snatched a 1-1 draw in Romania.

World champions Spain began their campaign in style as Fernando Torres scored twice in their 4-0 Group I success in Liechtenstein.

In the night's other group match, Lithuania and Scotland played out a stalemate 0-0 draw in Vilnius.

Under-fire England coach Fabio Capello was handed a boost as his side began their qualifying campaign with a 4-0 Group G success over Bulgaria at Wembley.

Jermain Defoe scored a hat-trick and Adam Johnson netted his first international goal, although the win was marred by what appeared a serious injury to Tottenham defender Michael Dawson.

There was disappointment for England's neighbors Wales in the other group game, as Mirko Vucinic scored the only goal in Montenegro's 1-0 win.

Group C saw all three matches end in away victories with Italy being forced to recover from going a goal behind to beat Estonia 2-1 in Tallinn, the Azzurri's first success in eight matches.

The home side took a 31st-minute lead when Sergei Zenjov reacted quickest to fire home a rebound.

But two Andrea Pirlo corners early in the second half turned things around in Italy's favor.

There was a surprise in Maribor where Slovenia were shocked 1-0 by Northern Ireland, for whom Manchester United midfielder Corry Evans swept home the only goal on his international debut.

And Serbia completed a good evening for the travelling sides with a 3-0 victory in the Faroe Islands with Dejan Stankovic and Nikola Zigic both on target.

In Group F, Greece fought back to earn a hard-fought 1-1 draw with Georgia after the visitors took a third minute lead through Alexander Iashvili.

In the other group match, Ivica Olic was among the scorers as Croatia cruised to a comfortable 3-0 success in Latvia.