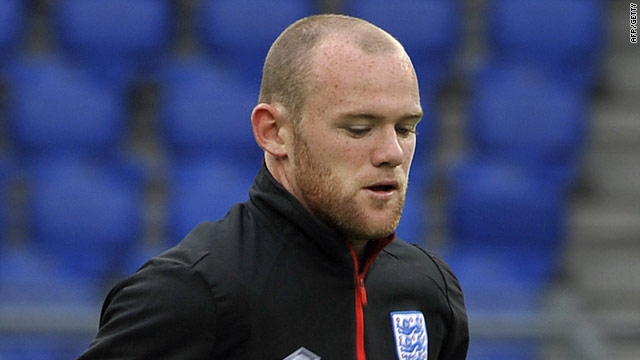 Wayne Rooney trains at St. Jakob Stadium in Basel ahead of the match against Switzerland.
STORY HIGHLIGHTS

(CNN) -- England manager Fabio Capello will name Wayne Rooney in his line up to face Switzerland in a Euro 2012 qualifier Tuesday despite allegations about the striker's personal life.

After the reports in a tabloid newspaper there were suggestions that the Manchester United star would sit out the match in Basel.

But Capello, who stripped the England captaincy from John Terry in May after allegations that the Chelsea defender had an affair with the ex-fiancee of teammate Wayne Bridge, is adopting a more lenient stance with Rooney.

"He will play," Capello told gathered reporters at a media conference Monday.

"I spoke with him and he's happy to play. I know the player wants to play and his training was really good and I'm sure he will play well tomorrow."

When pressed by reporters, Capello attempted to draw a line under the allegations.

"We are focused on the game not on the private life of the players," he said.

He went on: "Sometimes the players ignore the rules of the life. But at this moment we are focused and this is the most important thing."

"Yes, he's got an issue off the field but that won't affect him on the pitch. I spoke to him today and he's been the normal Wayne we know, a top player.

"We all understand the responsibility of being a footballer at the top level but we are human as well and along the way we are going to make mistakes. I've made some throughout my career, it's how you react," added the Liverpool star.

Capello, boosted by his side's 4-0 win over Bulgaria in their opening qualifier at Wembley last Friday, must decide who replaces the injured Michael Dawson in central defense.

Either Gary Cahill or Matthew Upson will step in with few other changes likely as the Italian sticks by a winning formula.