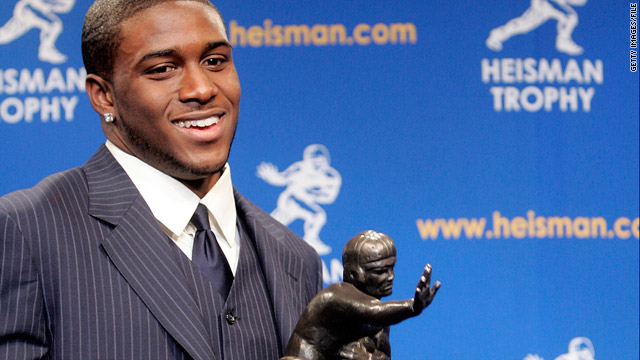 Reggie Bush says he'll give up the 2005 Heisman Trophy he won while at the University of Southern California.
STORY HIGHLIGHTS

(CNN) -- New Orleans Saints running back Reggie Bush announced Tuesday that he would forfeit the Heisman Trophy he won in 2005 when he was at the University of Southern California.

"I will forever appreciate the honor bestowed upon me as a winner of the Heisman," Bush wrote in a statement released by his pro team, the New Orleans Saints. "While this decision is heart-breaking, I find solace in knowing that the award was made possible by the support and love of so many. Those are gifts that can never be taken away."

Bush, who skipped his senior season at USC to enter the National Football League draft, has been under a cloud since an NCAA investigation led to harsh sanctions against his alma mater.

The investigation found that two would-be sports agents lavished gifts on the star and his family and that at least one member of the Trojans coaching staff knew about it. The NCAA gave the school four years of probation, forced it to vacate its last two wins of the 2004 season, including the 2005 Orange Bowl, and all of its wins in 2005.

The school is banned from bowl games in 2010 and 2011 and cannot associate itself with Bush. Additionally, running backs coach Todd McNair has been banned from off-campus recruiting. The punishments were announced in June.

"The persistent media speculation regarding allegations dating back to my years at USC has been both painful and distracting," Bush said in a statement released by the Saints. "In no way should the storm around these allegations reflect in any way on the dignity of this award, nor on any other institutions or individuals. Nor should it distract from outstanding performances and hard-earned achievements either in the past, present or future."

The NCAA ruled that Bush lost his eligibility to play college football in December 2004. The Heisman Trophy Trust, which administers the award, has been conducting its own investigation.

From December 2004, the sports agents, who were hoping to represent Bush in the NFL draft, allegedly paid for hotel rooms, rent on a home where Bush's family lived and a limousine ride to accept the Heisman in December 2005. But such payments are not allowed under NCAA rules.

In his statement, Bush said he wanted to turn "a negative situation into a positive one by working with the Trustees to establish an educational program which will assist student-athletes and their families avoid some of the mistakes that I made."

"I am determined to view this event as an opportunity to help others and to advance the values and mission of the Heisman Trophy Trust," he said.

The Heisman "recognizes the outstanding college football player whose performance best exhibits the pursuit of excellence with integrity," according to the award's website. "Winners epitomize great ability combined with diligence, perseverance and hard work."

Bush helped lead the Saints to their first Super Bowl victory during the 2009-2010 season.