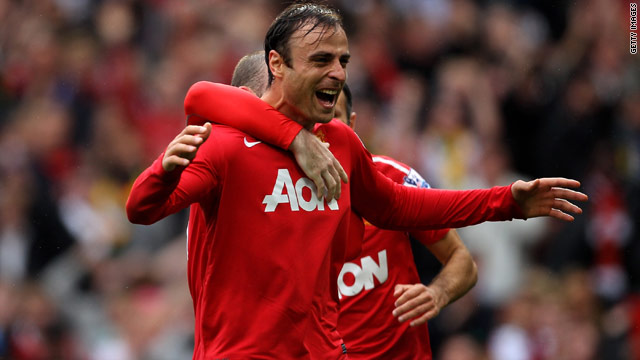 (CNN) -- Dimitar Berbatov scored a stunning hat-trick as Manchester United recovered from throwing away a two-goal lead to defeat Liverpool 3-2 in a thrilling English Premier League game at Old Trafford.

The Bulgarian striker rose above the visiting defence with six minutes remaining to secure the three points after Liverpool captain Steven Gerrard had scored twice in six second-half minutes to haul his side back into the game.

Berabatov had put United ahead with a header from a corner just before the interval and doubled the home side's advantage on the hour mark with a piece of brilliance -- bringing down a cross from Nani before executing a superb overhead volley that found the net via the underside of the crossbar.

But Liverpool came back into the game just five minutes later, Gerrard scoring from the penalty spot after Fernando Torres had been fouled in the area by Johnny Evans.

And the comeback looked to be complete when Gerrard netted from a direct free-kick that went straight through the Manchester United defensive wall.

United threw away a two-goal lead at Everton last weekend and they looked to be heading the same way until Berbatov intervened to become the first Manchester United player since Stan Pearson in 1946 to score a hat-trick against Liverpool.

The result puts United joint second with Arsenal in the table on 11 points, although the London side are ahead on goal difference.

However, both those teams are four points behind champions Chelsea, who maintained their 100 per cent start to the season with a 4-0 home victory over newly-promoted Blackpool.

All the goals came in the first half as Carlo Ancelotti's side ran riot. Salomon Kalou opened the scoring within two minutes after he was left unmarked at the far post from a corner.

Florent Malouda tapped home the second, after Didier Drogba had beaten the visitors offside trap, and Drogba himself added a third with a deflected shot.

Malouda added his second just before half-time but Blackpool's defence held firm after the break and Chelsea were unable to add to an impressive record of 21 goals in their opening five matches.

Defending champions Chelsea lead the way with a maximum 12 points from four games and they will be expected to increase their lead to four points later on Sunday when they entertain newly-promoted Blackpool.

In the day's other match, Argentine striker Carlos Tevez scored one and created the other goal as Manchester City moved into fourth place in the table with a 2-0 win at struggling Wigan.

Tevez opened the scoring before half-time when he took advantage of a poor header from Mohamed Diame to lob the ball over goalkeeper Ali Al Habsi.

And more defensive uncertainty from the home side resulted in Tevez clipping over a cross for Yaya Toure to score his first City goal from close range.