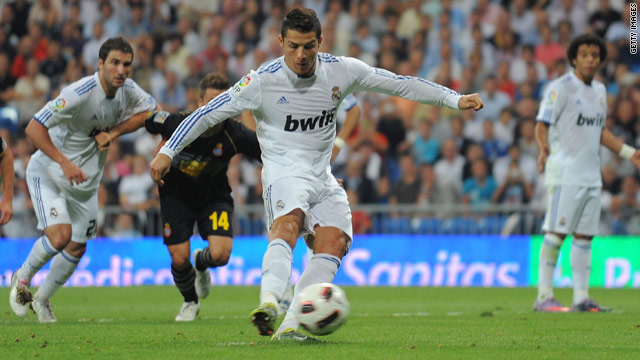 Cristiano Ronaldo converted a penalty in Real Madrid's 3-0 La Liga victory over Espanyol on Tuesday, a win that sent Los Blancos top of the table.

The Portugal attacker's first half spot kick was added to by second half strikes from Gonzalo Higuain and the man who later replaced the Argentine, Karim Benzema.

Neither side finished with 11 men on the pitch at the Bernabeu, with defender Pepe collecting two yellow cards for the home side, while Espanyol had both Ernesto Galan and Juan Forlin dismissed.

Real Madrid coach Jose Mourinho was satisfied with his team's performance, although he was less happy with the quality of the pitch and the time his side had to prepare for the match.

It's not easy playing on a pitch which is not in great shape.
--Jose Mourinho
RELATED TOPICS

"Once again we only had two full days to prepare for this match, and it's not easy playing against a team who has nothing to lose."

Valencia will overtake Mourinho's men in the standings with three points at home to Atletico Madrid on Wednesday.