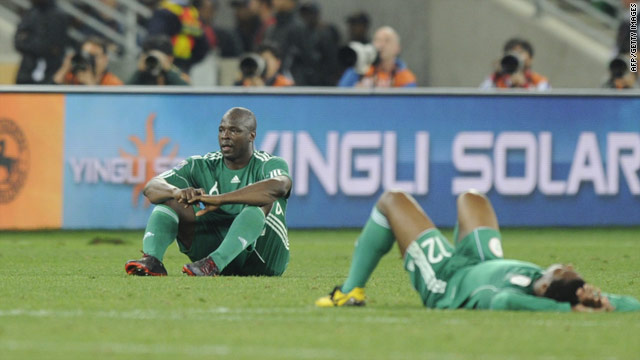 Nigeria's soccer team failed to make it out of Group B at this year's World Cup in South Africa.
STORY HIGHLIGHTS
RELATED TOPICS

The indefinite ban means Nigeria won't be allowed to participate in any international matches and will not be involved in qualifying for the African Nations Cup.

In the wake of the country's poor showing at the World Cup -- where they failed to get out of the group stages -- Nigerian president Goodluck Jonathan decided to suspend the national team at all levels for two years.

Jonathan then reversed his decision after FIFA threatened to expel Nigeria and withhold $8 million due to them for playing at the World Cup.

Now they have been told they will not be readmitted to international competition until FIFA are satisfied the NFF is free to operate without any government interference.

FIFA said in a statement given to CNN: "The FIFA Emergency Committee decided today, 4 October 2010, to suspend the Nigeria Football Federation (NFF) with immediate effect on account of government interference.

"This decision follows the latest events linked to the NFF, such as the court actions against elected members of the NFF Executive Committee preventing them from exercising their functions and duties, the stepping down of the acting NFF General Secretary on the instructions of the National Sports Commission, the decision of the Minister of Sports to have the Nigerian League start without relegation from the previous season, and the fact that the NFF Executive Committee cannot work properly due to this interference.

"The suspension will be maintained until the court actions have ceased and the duly elected NFF Executive Committee is able to work without any interference.

"During the period of suspension, the NFF will not be able to be represented in any regional, continental or international competitions, including at club level, and also not in friendly matches."

Nigeria had already played one African Nations Cup qualifier against Madagascar -- a game they won 2-0.