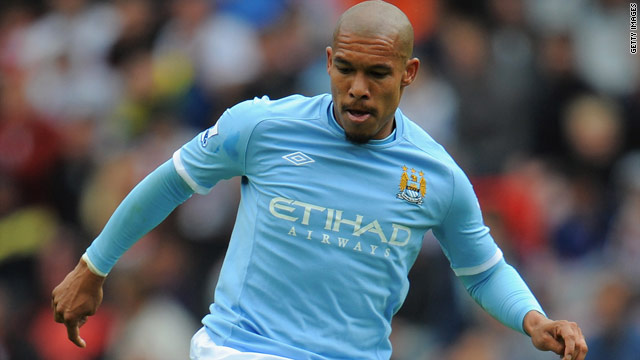 (CNN) -- Nigel De Jong has been dropped from the Netherlands squad for their Euro 2012 qualifying matches against Moldova and Sweden.

The Manchester City midfielder was involved in a tackle that broke the leg of Newcastle United's Hatem Ben Arfa in Sunday's English Premier League match at Eastlands.

The 25-year-old was not shown a card for the challenge, nor did the referee deem it to be a foul, but Newcastle later confirmed that Ben Arfa had suffered a double fracture.

Coach Bert van Marwijk told the Dutch Football Federation's official website: "I just informed the squad and told him I saw no other possibility.

"In the near future I will discuss this matter with Nigel but right now we have to focus on the upcoming two matches."

It was a wild and unnecessary offence. He went in much too hard.
--Bert van Marwijk, Netherlands coach
RELATED TOPICS

It is not the first time a tackle from De Jong has caused controversy after his high challenge on Spain's Xabi Alonso during the World Cup final. He was shown a yellow card after planting his boot into Alonso's chest.

Prior to that United States international Stuart Holden had his leg broken in a friendly with the Netherlands after a De Jong tackle.

Van Marwijk was quoted as telling the Dutch Algemeen Dagblad newspaper: "I've seen the pictures back. It was a wild and unnecessary offence. He went in much too hard.

"It is unfortunate, especially since he does not need to do it. The funny thing is that the referee did not even show a yellow card for it.

"Apparently, there are other standards. But I have a problem with the way Nigel needlessly looks to push the limit. I am going to speak to him.''

Twente midfielder Wout Brama and Ajax winger Urby Emanuelson have been drafted into Van Marwijk's squad for the double header.

The Netherlands play Moldova on Friday night before hosting Sweden on Tuesday.