Why soccer should fear the NBA 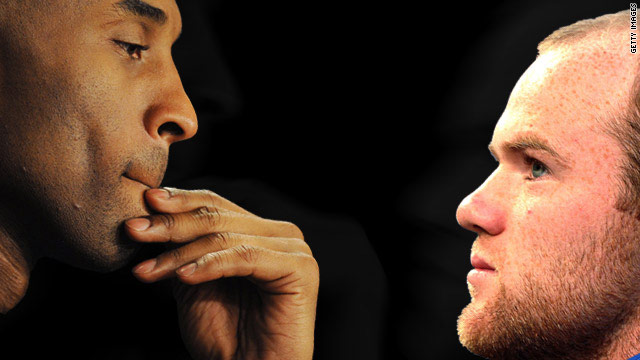 Kobe Bryant of the NBA and Wayne Rooney of the English Premier League are stars of the two competing global games.
STORY HIGHLIGHTS

(CNN) -- When the English Premier League announced plans to play a regular-season, competitve match on foreign soil -- dubbed the "39th game" - there was almost unified outcry from the many factions involved in the English game.

Most newspapers and commentators attacked the move as indelible proof of the division's growing greed and unbridled ambition to find consumers in every corner of the globe. The plan was ridiculed and then quietly dropped.

But for Richard Scudamore -- the chief executive of the English Premier League -- it wasn't so much to do with avarice but, rather surprisingly for a league regarded as one of the most successful sporting franchises on the planet, survival.

"People think that it is inevitable that the world will throw itself at the Premier League," he later told The London Times.

"We are competing in a fiercely competitive cultural marketplace...they [foreign markets] have still to decide which sports they are going to be interested in."

There were no such anxieties with those heading basketball's top division. Next March will see the NBA stage its first ever regular season games in London.

Whilst soccer's ubiquity as the global game has long been taken for granted, basketball, through the NBA, has slowly begun to take over the world.

This week a further bridgehead on the traditional home of football was taken as the L.A. Lakers cruised into the British capital to play a pre-season exhibition match against the Minnesota Timberwolves. The arena was a sell out, just one of a four-stop, glitzy European tour taking in Paris, Milan and Barcelona.

In the front row at the London game, a host of Premier League stars like Arsenal's Cesc Fabregas watched on as Kobe Bryant -- whose $25 million a year wages dwarfs even the Spaniards pay packet -- stole the show with a brief six-minute cameo.

It was the fourth season running the NBA has staged a pre-season tour of Europe, a dress rehearsal for the regular season games due to take place in London next March.

By ripping up the rule book, basketball is outmaneuvering football in key markets like China, Africa and the Middle East. Football's position as the world's most popular sport is under threat.

"We have seen positive growth in our regions, the Middle East and Africa. In the Middle East basketball is the fastest growing team sport. Football is still dominant but we have seen a huge surge and we are launching an Arabic language website too."

The example of China is telling. Long seen as the next great market for FIFA, football's global governing body, with its 1.3 billion potential fans, the game's organization has been mired by accusations of match-fixing and bribery.

Earlier this year the former head of the Chinese Super League, Nan Yong, and his deputy Yung Yimin, were arrested on charges of match fixing and bribery.

The scandal has been a huge boon for basketball, and in particular the NBA, in China. It has overtaken football as the most watched sport in the country -- the NBA estimates 450 million people now tune in -- and more than 300 million play the game.

"The NBA in China is massively successful and puts football to shame," explains Rowan Simons, author of Bamboo Goalposts, a book about his attempts to set up amateur football clubs in China.

"The NBA set up NBA China, selling 11 per cent [worth $253 million] to ESPN and Disney. It has several hundred employees. The head of NBA China is Tim Chen [former CEO of Microsoft China].

"It's a big investment play for hearts and minds of Chinese sports fans. They are working with the Chinese government to get a basketball court into ever village in China," added Simons.

"Marketing, franchised teams, sponsorship, AEG building the stadiums; it's all coordinated in one NBA push. Then you look at football. Internationally, football has no representation in China. Manchester United has one office in Hong Kong."

The reason why the NBA has avoided some of the problems that football has faced, according to Goldschmidt, is down to the NBA's centralized structure and subsequent dominance of the global game.

Whilst FIFA entrusts a single Football Association (FA) to develop the game in each country, the NBA hasn't been encumbered with the same restraints. "Football has done an amazing job...and if sport's growing everyone is a winner," concedes Goldschmidt.

"But the NBA is very different. A great thing for the NBA is that it has the best players in the world; [whereas] you have lots of great leagues in football. We have a different structure. Because of that centralized control we can control and develop our brand."

But according to some, there are far bigger shifts that explain the growing popularity of basketball at the expense of football. Namely, increased global urbanization.

The war between football and basketball is [many] civil wars between city and country, urban and rural.
--Os Davis editor of the ballineurope.com
RELATED TOPICS

"The war between football and basketball is actually dozens of individual civil wars between city and country, urban and rural," explains Os Davis editor of the ballineurope.com website.

"Basketball programs, facilities and equipment for youth, pros and even casual play are available in metropolises from Barcelona to Moscow as outdoor playing fields slowly disappear.

"Football is, and probably always will be, the game of the people, but basketball is the sport of the modern world: internationalized, well-marketed, fast-paced and urban."

The success of this summer's football World Cup in South Africa, the single most watched sporting event on the planet, proves that football is still in the box seat when it comes to global popularity. But, equally, the success of this week's NBA tour in Europe, not to mention it's wider successes in Asia, show that it can't take its position for granted.

"[In ten years time] I think there will be associated leagues under the NBA umbrella on different continents and, likely, an NBA division in Europe," David Stern, the commissioner of the NBA, told CNN in London shortly before the Minnesota Timberwolves beat the LA Lakers 111-92.

"The world will be playing enormous, enormous amounts of basketball." Even in the "Beautiful Game's" backyard, football should watch its back.