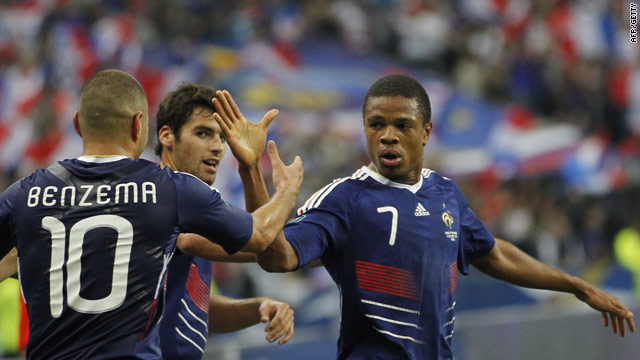 Loic Remy is congratulated by Karim Benzema after his crucial late goal in the Stade de France.
STORY HIGHLIGHTS

(CNN) -- Substitutes Loic Remy and Yoann Gourcuff scored late goals as France boosted their Euro 2012 qualifying campaign with a 2-0 victory over Romania in the Stade de France on Saturday night.

Youngster Remy, sent on by coach Laurent Blanc as the match looked set to end goalless, raced on to an Alou Diarra through ball to score in the 83rd minute.

Gourcuff thumped home the second in stoppage time to seal a vital three points, their second straight victory taking them top of Group D with six points from three games.

"It was a magical feeling to score," Marseille star Remy told AFP.

It was a magical feeling to score
--Loic Remy
RELATED TOPICS

"Now we're top of the group despite our poor start (losing at home to Belarus) so we've got things back on track. I hope we can continue in that vein."

The revamped Les Bleus had been denied by an inspired display from visiting goalkeeper Costel Pantilimon until their late goal flurry.

In one frantic spell in the second half, he denied Mathieu Valbuena, Karim Benzema and Samir Nasri with a string of stunning saves.

He deflected Valbuena's shot onto the crossbar and blocked efforts from Real Madrid's Benzema and Arsenal's Nasri from close range.

But Romania were also a threat and soon afterwards thought they had gone ahead through Cristian Sapunaru, but his shot, after a mistake by Gael Clichy, hit the inside of the post and into the grateful arms of Hugo Lloris.

France, looking to rebound after a disastrous World Cup and losing their group opener to Belarus, produced a lively first half display and Benzema came close to opening the scoring as his curling effort shaved the outside of the post.

In other Euro 2012 qualifying action, Niko Kranjcar's first-half double gave Croatia a 2-1 win in Israel and lifted them to the top of Group F.

Tottenham's Kranjcar scored his opener from the penalty spot in the 38th minute and added his second four minutes later.

Israel pulled one back through Itay Shechter's late strike but they could not salvage a point.