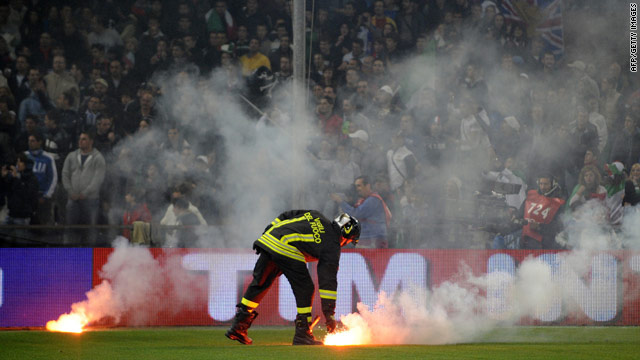 A fireman collects one of the flares thrown onto the pitch that forced the Italy v Serbia match to be abandoned.
STORY HIGHLIGHTS
RELATED TOPICS

(CNN) -- Serious crowd trouble has led to Tuesday's soccer match between Italy and Serbia in Genoa being abandoned after just six minutes.

Disturbances in the area of the Marassi stadium where visiting Serbian fans were congregated meant the kick-off had to be delayed by more than 30 minutes.

And, when play began, referee Craig Thomson stopped the match after flares were thrown from the same end as the earlier disturbances, with one appearing to strike Italian goalkeeper Emiliano Viviano.

Italy coach Cesare Prandelli told reporters: "We're not playing this game. I have never seen anything like this before."

Before kick-off, three Serb fans climbed onto a security screen and initially refused to get down, while police, firefighters and stewards surrounded the visiting fans as flares and objects were hurled at the Italian fans.

The match was a Group C qualifier for the Euro 2012 championships.

In the other Group C matches, Slovenia claimed a vital 1-0 win in Estonia to move up to second place in the table, level with Italy who still lead the way on goal difference.

Meanwhile, Northern Ireland, who held Italy to a 0-0 draw in Belfast on Friday, needed a late Kyle Lafferty goal to scrape a 1-1 draw in the Faroe Islands.

Elsewhere, world and European champions Spain were given a fright by Scotland in Glasgow, eventually securing a thrilling 3-2 Group I victory.

A David Villa penalty and an Andres Iniesta goal looked to have given Spain the three points but Steven Naismith and a Gerard Pique own goal gave the Scots hope.

However, substitute Fernando Llorente headed home the winner for the visitors with 11 minutes remaining.

Spain are three points clear of the Czech Republic, who lie second in the table after a 2-0 win at bottom-of-the-table Liechtenstein.

Germany continued their 100 per cent record in Group A with a comfortable 3-0 win at Kazakhstan, who are still pointless after their four matches.

After a goalless first half, Joachim Loew's side made their class tell after the break courtesy of goals from Miroslav Klose, Mario Gomez and Lukas Podolski.

Austria are now second in the table on seven points following a remarkable 4-4 draw with Belgium in Brussels.

Turkey are a further point behind in third after suffering a shock 1-0 defeat in Azerbaijan, who collected their first victory.

Russia lead the way in Group B after an eight-minute Aleksandr Kerzhakov goal gave them a vital win in Macedonia.

They lie on nine points, two ahead of Ireland, Armenia and Slovakia who are locked in a three-way tie for second place.

Slovakia and Ireland drew 1-1 in Zilina, while Armenia crushed bottom side Andorra 4-0 in Yerevan.

France head Group D with nine points from their four games after struggling to a 2-0 win over minnows Luxembourg in Metz.

Karim Benzema and Yoann Gourcuff netted for Laurent Blanc's side, who lead unbeaten Belarus -- 2-0 victors over Albania in Minsk --by a point.

World Cup runners-up Netherlands continue to impress in qualifying and they maintained their 100 per cent Group E record with a stunning 4-1 victory over Sweden in Amsterdam.

Klass-Jan Huntelaar and Ibrahim Afellay both scored twice as the Dutch remained three points clear of second-placed Hungary, who needed a goal four minutes into injury time from Balazs Dzsudzsak to claim a 2-1 success in Finland.

The remaining group game saw Moldova win 2-0 in San Marino, who remain bottom of the group without a point.

Group F remains the tightest of the nine groups with three nations still unbeaten after four rounds of matches.

Greece lead the way with eight points after a 2-1 home win over Israel, while Georiga remain third on six points after conceding a late equalizer in a 1-1 draw in Latvia.

In Group G, England failed to score for the first time in their revamped Wembley home after being held to a 0-0 draw by table-toppers Montenegro. Both nations remain unbeaten and look to have the group between them.

The other match saw Switzerland thrash Wales 4-1 in Basel, with the Welsh bottom of the table without a point from their three matches.

Portugal are up to second place in Group H after a 3-1 victory in Iceland, who remain bottom of the table without a point.

They trail leaders Norway, who did not play, by two points while Denmark are third after defeating Cyprus 2-0.