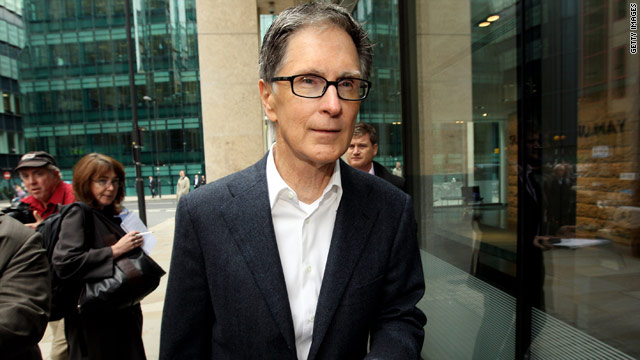 London, England (CNN) -- One of England's most famous soccer clubs has been sold to the American owners of baseball's Boston Red Sox following a protracted Trans-Atlantic legal battle.

Liverpool's previous owners Tom Hicks and George Gillett, who are also American, earlier withdrew their temporary restraining order blocking the sale, having twice gone to a court in Texas to prevent the transaction.

"I can't tell you how happy I am that we finally got to this stage," Henry told a throng of reporters.

"We're going to do a lot of listening. We have a lot to learn, but our actions will hopefully speak louder than words."

Video: John Henry: 'A lot of work to do'

Video: Turning it around with the new boss
RELATED TOPICS

The deal eliminates the English Premier League club's debt obligation -- believed to be around $377 million -- to the club's main creditor, the Royal Bank of Scotland (RBS).

Crucially, this will prevent the club's holding company, Kop Football Holdings, from going into administration, the British equivalent of bankruptcy. This carries a nine-point penalty for Premier League clubs, and could have led to relegation from the top flight given the club's poor start to the season.

Liverpool chairman Martin Broughton, whom Hicks and Gillett hired to find a buyer, said in a statement: "I am delighted that we have been able to successfully conclude the sale process which has been thorough and extensive.

"The Board decided to accept NESV's offer on the basis that it best met the criteria we set out originally for a new owner. NESV is buying Liverpool in order to put it on an excellent financial footing and continue to develop it internationally.

"This is a good deal which comprehensively resolves the pressing issue of the Club's debt and should give staff, players and fans great confidence regarding the future of Liverpool F.C."

From the frying pan into the fire for Liverpool?

Meanwhile, Hicks and Gillett are now planning a $1.6 billion damages action, claiming the sale is "illegal."

A statement on behalf of the pair read: "It's an extraordinary swindle and it will result in exactly the wrong thing for the club and the fans."

RBS, which had set a Friday deadline for Hicks and Gillett to repay the loan used to finance their 2007 purchase of Liverpool, said any legal action by the pair "will be vigorously opposed."

"RBS is pleased the sale to NESV has been completed and is confident this will provide the foundation for the club and its fans to enjoy renewed success on and off the pitch," the bank said in a statement.

"RBS is aware of reports that Mr. Hicks and Mr. Gillett may intend to pursue further litigation in relation to the sale of Liverpool F.C.. The English courts have described claims made to date as "not realistic and abusive." Any further claims against RBS will be vigorously opposed."

Earlier Friday, Hicks was believed to be trying to offload his shares in the club to a U.S. hedge fund which already controls Gillett's 50 percent ownership, Britain's Press Association said.

However, the Premier League, which oversees the game in England, rejected Mill's requests to undergo a fit and proper person test, saying it could only negotiate with the Liverpool board, the BBC reported.

The board, headed by Broughton, approved the deal with NESV last week without the consent of Hicks and Gillett as a way to rescue the club from its financial problems. But the pair said through their lawyers that superior offers had been "on the table and were not chosen."

A subsequent bid to veto the sale was rejected by a London court, before Hicks and Gillett obtained the restraining order in a Texas court on Wednesday in an effort to delay the deal.

On Thursday the case was taken to a London court for a second time, but English judge Mr. Justice Floyd said the move by Hicks and Gillett amounted to "unconscionable conduct," and granted anti-suit injunctions to nullify decisions taken in Texas.

The American duo were given until 1500 GMT (1100 EST) on Friday to comply with the ruling.

Henry, meanwhile, had pledged to fight Hicks' "last desperate attempt" to hang on to Liverpool.

"We have a binding contract," he wrote on his Twitter account late Thursday. "Will fight Mill Hicks Gillett attempt to keep club today. Their last desperate attempt to entrench their regime."

NESV promised that if its offer was successful, it would keep all acquisition debts away from Liverpool's football operations and stabilize the club in order to return it to its glory days.

One win in seven games has left the team 18th in the 20-team Premier League table in the early stages of the season, and at risk of possible relegation in May unless results improve. The club faces one of its biggest matches of the season this Sunday against city rivals Everton.

The club has earned a joint record of 18 English titles -- but none since 1990. It is also England's most successful club in European football, winning five European Cups, most recently in 2005.