PSV put 10 past once proud Feyenoord in Dutch league rout 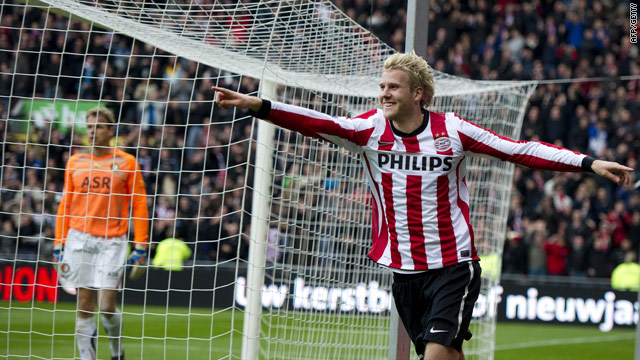 The Rotterdam side are one of the traditional powerhouses of Netherlands' football but find themselves second bottom with coach Mario Been under intense pressure.

This latest humiliation, easily the worst result in their history, they were beaten 8-2 by arch-rivals Ajax in 1982, came at PSV's Phillips Stadium.

Their cause was not helped by the red card for Kelvin Leerdam after 34 minutes when they were a solitary goal behind through Jonathan Reis, who went on to grab a hat-trick.

But the immediate future looks bleak for both Been and Feyenoord, who have won 14 Dutch titles, 11 Dutch Cups to go with their 1970 European Cup triumph and two UEFA Cup crowns.

Been told the official Feyenoord website that it was a "dark day in the club's history."

Fellow Dutch giants PSV have achieved a 10-goal victory margin twice in their history against the Go Ahead Eagles and FC Volendam in 1973 and 1998 respectively.

They top the Dutch standings ahead of defending champions FC Twente who kept up the chase with a 3-2 win over Den Haag, with Marc Janko scoring the crucial goal.