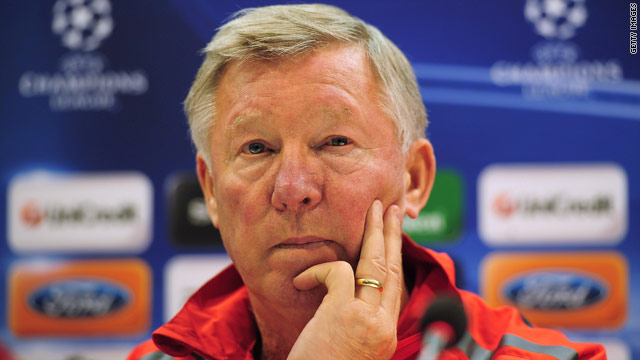 Alex Ferguson has won the Champions League twice with Manchester United, and coached Scotland at the 1986 World Cup.
STORY HIGHLIGHTS

(CNN) -- Manchester United boss Alex Ferguson has hailed the Champions League as the best football tournament on the planet, describing the World Cup as worse than a trip to the dentist.

The Scot was replying to suggestions that Europe's top club competition was losing its appeal ahead of the English side's 3-0 win away to Turkish champions Bursaspor on Tuesday night.

Critics of the UEFA-run event claim that there are too many meaningless games and mismatches in the group stage, with the real excitement not starting until the second round when two-leg knockout ties begin.

"The important thing is the Champions League has proved itself since its inception," two-time tournament winner Ferguson told reporters ahead of United's match against a side who have lost all four group games so far.

Have you seen the last six World Cups? It is better going to the dentist, I suppose
--Alex Ferguson
RELATED TOPICS

"It is better than the World Cup. It is unbelievable. There are some fantastic games. Yes, you have to get through the group stages before you get to the really exciting stage, but it is a fantastic tournament.

"If you look at the great teams in the European Cup now and think of the Premier League, you are not going to get the same crowd for Arsenal playing a lower team in the league, or the same tension and drama as you would Arsenal against Manchester United.

"It is the same in the Champions League. Inter Milan playing one of the smaller teams will not get the same crowd."

Ferguson was less complimentary about FIFA's World Cup, with the last staging in South Africa this year featuring several dull, poor-quality matches before finally taking off in the knockout stages.

"Have you seen the last six World Cups? It is better going to the dentist, I suppose," quipped the 68-year-old, who coached Scotland at the 1986 tournament in Mexico.

The Spanish club won 3-0 at home to Scottish champions Rangers.

Wednesday night's highlight will be the clash between Group G leaders Real Madrid and AC Milan in Italy.

The Spanish side, who have won the European title a record nine times, will be seeking to become the first club to score 700 goals in the competition, needing one more to reach that milestone.

Milan trail Real by five points after losing 2-0 in the Bernabeu two weeks ago, and come into the match following Saturday's 3-1 defeat by Italian Serie A rivals Juventus.

"We're going to be more careful tomorrow," coach Massimiliano Allegri told reporters on Tuesday. "In Madrid we started the game a bit frightened and made a lot of mistakes. We mustn't play like that again.

"Milan traditionally look to win by playing a good brand of football. We'll have to take to the field light-hearted and aware of our strength and technical quality. A united group ready to defend can allow its strikers to be decisive."