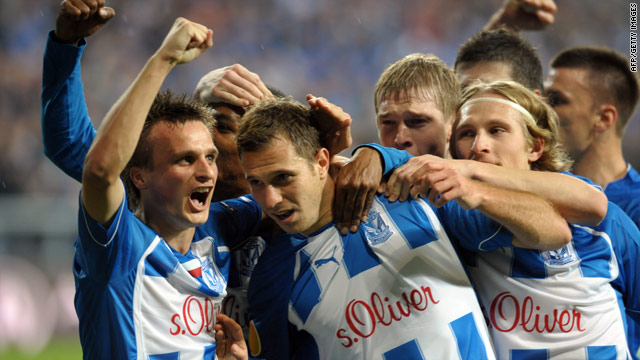 Roberto Mancini's side travelled to Poland on the back of successive Premier League defeats against Arsenal and Wolverhampton and another reverse looked on the cards when they fell behind to Dimitrije Injac's low drive on the half-hour mark.

But City started the second half well and levelled six minutes after the break when Emmanuel Adebayor fired home from close range after his initial header had been saved.

The scores remained level until the 86th minute when young City defender Dedryck Boyata's defensive header bounced back off Manuel Arboleda and past goalkeeper Shay Given into the corner of the net.

And Poznan sealed the win that puts them level with City at the top of the group on seven points, when Mateusz Mozdzen's stunning 30-yard injury time strike flew past a helpless Given.

Mancini's expensively-assembled side remain favorites to reach the knockout stage, although the pressure will now mount on the Italian manager ahead of Sunday's trip to in-form West Bromwich Albion.

Juventus are third in the group on four points after their fourth successive draw, 0-0 at home to Austrian side Salzburg, who are bottom of the table on two points.

Bayer Leverkusen and defending champions Atletico Madrid are still on course to qualify from Group B after both sides collected wins on Thursday.

Leverkusen lead the group with eight points, with Atletico on seven and Salonika next best on four.

Group C leaders Sporting Lisbon lost their 100 per cent record as they suffered a 3-1 defeat at Belgian side Gent.

Despite the reverse, the Portuguese club remain clear on nine points, with Lille -- who drew 2-2 in Levski Sofia -- next best on five. The remaining two teams are both on four points in a tight section.

Group D is even tighter after favorites Villarreal suffered a 1-0 defeat at Greek side PAOK Salonika, their second reverse in four group matches.

PAOK are on seven points, level with Dinamo Zagreb -- 2-0 winners at Bruges -- at the top. Villarreal are still in contention on six points but Bruges are trailing on two points and look out of contention.

Meanwhile, BATE Borisov secured their qualification from Group E after a comfortable 3-1 win over Sheriff Tiraspol.

The Belarussian side are on 10 points, with Dinamo Kiev favorites to join them in the last 32 after a 2-0 success over AZ Alkmaar. The Ukrainian side are on seven points while the remaining two teams are trailing on three points apiece.

Russian side CSKA Moscow maintained their superb form in Group F, as a quick-fire double from Tomas Necid saw them come from behind to beat Palermo 3-1 and secure their last 32 qualification.

CSKA lie on 12 points, five points clear of Sparta Prague who look set for second place after a 3-1 win at Lausanne. The Swiss side only have a point and cannot now qualify but Palermo retain an outside chance on three points.

Compatriots Zenit St Petersburg, the 2008 winners, are also on a maximum 12 points and are certain to win Group G after a thrilling 3-2 victory at Hajduk Split.

AEK Athens and Anderlecht drew 1-1 in the other match and are both on four points with Hajduk still with a chance on three points.

Bundesliga side Stuttgart claimed an impressive 3-0 Group H victory at Madrid- based Getafe and have qualified with a maximum 12 points from their four matches.

Young Boys remain second on six points despite a 2-0 defeat at Odense who are on three points, alongside Getafe, after collecting their first win.

Dutch side PSV Eindhoven (10 points) need just another point to secure qualification from Group I after a 3-0 win over Debrecen, who now cannot qualify after losing all their four games.

Sampdoria (five points) and Metalist Kharkiv (seven points) drew 0-0 in the other match and it looks like they will battle it out for the second qualification place.

Bundesliga leaders Borussia Dortmund are in danger of elimination after their 0-0 draw at Paris St Germain. The French side are on eight points with Dortmund on five and Ukrainian outsiders Lviv out of contention after losing all their matches so far.

A superb second-half hat-trick from captain Steven Gerrard gave Liverpool a 3-1 Group K victory over Napoli to leave the Premier League side top on eight points.

Steaua Bucharest are up to second on five points after defeating Utrecht 3-1 but the other two sides are still in contention on three points apiece.

Although neither have yet qualified, Porto and Besiktas look booked for the two berths in Group L after they drew 1-1 in Portugal.

Porto lost their 100 per cent record but lead the table on 10 points with the Turkish side on seven. CSKA Sofia beat Rapid Vienna 2-1 in Austria for their first win, but both teams trail on three points each.