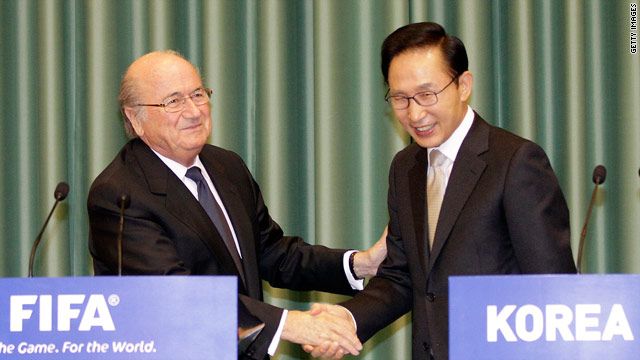 Sepp Blatter was in Seoul to receive South Korea's Order of Merit for Sport from the country's president Lee Myung-Bak.
STORY HIGHLIGHTS

(CNN) -- FIFA president Sepp Blatter praised South Korea's bid to host the 2022 World Cup on Monday and said that the sport had the power to unite the divided northern and southern halves of the country.

The hosts for the 2018 and 2022 World Cups will be announced by FIFA on 2 December, with Australia, Japan, Qatar and the U.S. also competing to host the 2022 competition.

"There is no doubt that Korea should be ready to organize a good World Cup," Blatter told reporters at a joint press conference with South Korean president Lee Myung-Bak in the capital Seoul, after being awarded the country's Order of Merit for Sports.

"Football is more than a game, as it has a socio-cultural impact and can therefore connect people all over the world."

South Korea were joint hosts of the 2002 World Cup with Japan, and the country's team became the first from Asia to reach the semifinals of the tournament that year.

Football is more than a game, it has a socio-cultural impact and can connect people all over the world
--Sepp Blatter
RELATED TOPICS

At the 2010 World Cup in South Africa they reached the last 16 for the first time away from home, while North Korea took part in the event again after a 44-year absence.

President Lee agreed with Blatter and said he believed football could bridge the gap between the North and South of the penninsula, which have been separated by a fortified border since conflict ended in a truce in the 1950's.

The chairman of the country's bid committee Han Sung-Joo has also expressed his desire for North Korea to be involved in the bid, should it prove successful.

"FIFA and football play a very important role in fostering peace and friendship across the world," Lee said.

"Football is the only common link which can unite the people of the two Koreas. Organizing the FIFA World Cup would bring a message of hope and peace not only to the Korean peninsula, but also to the world."