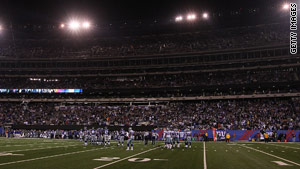 (CNN) -- A series of power failures at New Jersey's New Meadowlands Stadium brought Sunday night's game between the New York Giants and the Dallas Cowboys to a temporary halt.

"Pitch black stadium with a lot of people," a Fox TV announcer said after play resumed. "It's been a weird day."

"The New Meadowlands Stadium experienced two power outages in the 3rd quarter of tonight's game," a statement issued by stadium said. "Power was lost when one of the two feeders to the stadium experienced a power interruption."

The stadium then started taking power from the second feeder, the statement said.

"A second power interruption occurred to the second feeder causing a full outage," the statement said. "Functionality to the original feeder was restored and we are now receiving power though that feeder."

"We are currently investigating the original cause of the interruption," the statement said.

The power incident lasted about 12 minutes, Fox announcers said on air, adding that some players briefly hit the ground during the blackout.

The Cowboys ended up beating the Giants 33-20.

CNN's Susan Candiotti and Cheryl Robinson contributed to this report.