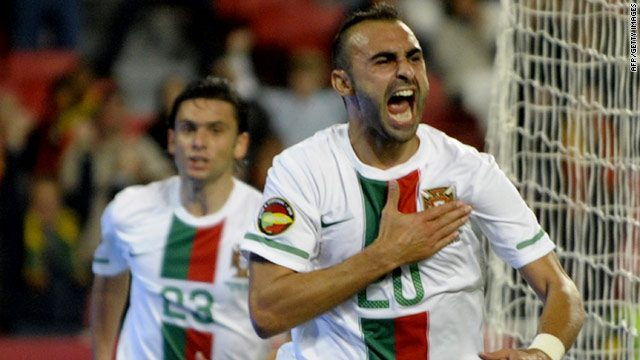 (CNN) -- Portugal earned a satisfying 4-0 win over world-champion neighbors Spain on Wednesday night, while France continued to improve under Laurent Blanc with a 2-1 victory away to England in another friendly.

Spain won the last clash between the two teams in July on the way to winning the World Cup in South Africa, ending Portugal's 19-match unbeaten run.

But Helder Postiga struck twice after Carlos Martins broke the deadlock before substitute Hugo Almeida settled the match for Portugal, who have put in a joint bid with Spain to host the 2018 World Cup and are celebrating the 100th year of the Portuguese Republic.

Postiga doubled the lead four minutes after the interval with a clever backheel from Joao Moutinho's low right-wing cross, and the Sporting Lisbon striker fired in the third with 22 minutes to play when Spain's defense could not clear.

Almeida then beat the offside trap to collect Pepe's throughball and beat the onrushing Casillas in the fourth minute of time added on to score his 12th international goal.

It was only Portugal's second win in nine meetings with Spain, who have not won in Lisbon since 1934.

Benzema fired the opening goal in the 16th minute with a low shot past goalkeeper Ben Foster at the near post following a smart interchange of passes with Florent Malouda.

Capello's experimental young England team went 2-0 down in the 55th minute when fullback Bacary Sagna found space down the right and midfielder Valbuena volleyed in a low shot after teammate Sami Nasri completely missed his attempt.

Striker Crouch, who came on for the injured Steven Gerrard, guided in a clever volley at the far post from Ashley Young's 85th-minute corner for his 23rd goal in 43 England appearances, but it was not enough to prevent his team being booed off.

Italy were held 1-1 by Romania in Austria as Ciprian Marica scored at both ends.

The striker put Romania ahead in the 34th minute after the Italian defense failed to clear, but headed past his own goalkeeper with seven minutes to play after Italy substitute Fabio Quagliarella touched on a corner by halftime replacement Andrea Pirlo.

Germany drew 0-0 away to Sweden in Gothenburg in a match of few chances as both teams' coaches experimented with their line-ups.

Norway won 2-1 away to the Republic of Ireland, World Cup dark horses Slovakia lost 3-2 at home to Bosnia-Herzegovina, while Serbia won 1-0 in Bulgaria with an 80th-minute goal from striker Nikolai Zigic -- who was later sent off.

Russia, who also hope to host the 2018 World Cup, lost 2-0 at home to Belgium as highly-rated young striker Romelu Lukaku scored both goals in Voronezh.

The Netherlands, bidding jointly for 2018 with Belgium, beat Turkey 1-0 in Amsterdam as striker Klaas-Jan Huntelaar scored the winner in the 52nd minute with his ninth goal in the last five internationals.