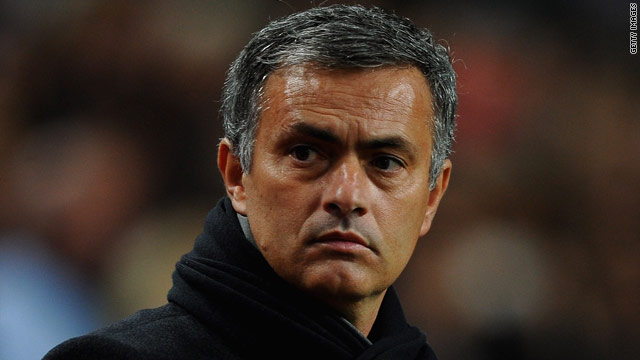 Jose Mourinho has been charged with improper conduct after two of his Real Madrid players were sent off for time-wasting.
STORY HIGHLIGHTS
RELATED TOPICS

The quintet were charged with improper conduct following the Spanish club's 4-0 win over Ajax in the Champions League on Tuesday night.

Defender Sergio Ramos and midfielder Xabi Alonso were both sent off for time-wasting late in the match in Amsterdam, meaning they will miss the final Group G game next month.

However, with Real having already qualified for the second round, it means their disciplinary records will be clean for the two-legged tie in February and March.

"A disciplinary case has been opened against Real Madrid CF for the improper conduct of coach Jose Mourinho and players Xabi Alonso, Sergio Ramos, Iker Casillas and Jerzy Dudek during the UEFA Champions League Group G match against AFC Ajax in Amsterdam on Tuesday," confirmed a UEFA statement.

Keeper and captain Casillas was involved as he allowed Ramos to take a goalkick, which the Spain international delayed doing so until he was booked -- and then he shook the hand of the referee.

Substitute keeper Dudek had earlier appeared to relay a message from Mourinho on the bench to Casillas, then Alonso was booked for delaying a free-kick.

The 55-year-old has been sacked after attacking home team Basel's dugout when Cluj conceded a second-half goal, losing 1-0.

"The image and the values of the club can not be associated with the misbehavior which took place in the 75th minute of the game with FC Basel," Cluj president Iuliu Muresan said in a statement on Thursday.

"Due to this unwanted gesture committed by Sorin Cartu we have decided to sack him from his current position. We would like to give our most sincere apologies first of all to UEFA, to the Swiss club FC Basel 1893, to our fans and to all football and sports fans.

"As of today the manager of the team will be Alin Minteuan. He will be assisted by Paolo Potocnik and Horea Carlan."

UEFA said both cases will be heard next Tuesday.