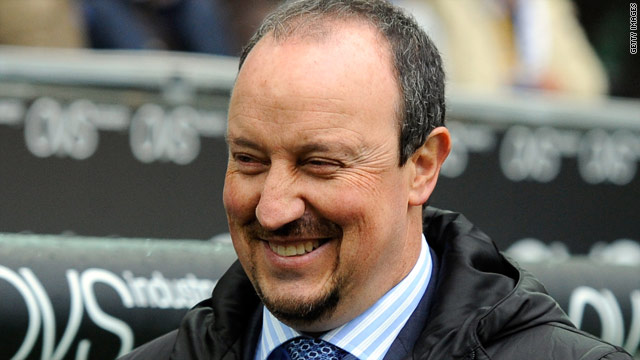 (CNN) -- Inter Milan manager Rafael Benitez was delighted after the Italian champions ended a morale-boosting week with a 5-2 victory at home to Parma on Sunday which halted a run of four Serie A games without a win.

Fifth-placed Inter still trail leaders and arch-rivals AC Milan by seven points after 15 games, but Benitez was satisfied after his team followed up the midweek win over Twente that put his inherited titleholders into the second round of the Champions League with one group match still to play.

Dejan Stankovic scored his first hat-trick in Italian football as Inter led 3-1 inside 22 minutes with two goals from the midfielder and the other from Wednesday's match-winner Esteban Cambiasso, having trailed to Hernan Crespo's early strike against his former club.

The veteran Argentine striker pulled another goal back to make it 3-2 at halftime, but Stankovic and Thiago Motta scored in the final 20 minutes to seal Inter's sixth victory of the Serie A campaign.

"There are many things that make me satisfied. First of all, the fans who I thank because in the moments of difficulty they have always been close to the team," Benitez, who replaced Jose Mourinho in June, told the club's website.

Wins are like penicillin: they cure all ailments and get you fired up for the next challenge
--Dejan Stankovic
RELATED TOPICS

"Then I like the young players on the pitch today -- Natalino, Nwankwo. I like Motta, in general the effort of the team and I'm very pleased for Stankovic, who needed a similar satisfaction. For all this, I am happy."

The 32-year-old Serbian was delighted to play his part in restoring the team's fortunes.

"Wins are like penicillin: they cure all ailments and get you fired up for the next challenge," Stankovic said. "We were excellent today, as we were against Twente. I'm happy with how the whole team played.

"We should have been more in control. But I think we can all be pleased with ourselves because it was our second win on the trot. Now let's focus on Lazio and then the Club World Cup."

Second-placed Lazio trail Milan by three points after being held 1-1 at home by mid-table Catania on Sunday, needing an equalizer from Brazilian midfielder Hernanes right on halftime.

Roma could have climbed up to third place, but suffered a first defeat in eight league matches in going down 3-1 at Palermo.

Striker Fabrizio Miccoli opened the scoring in the 20th minute for Palermo, who moved above Roma into sixth place on goal difference behind Inter, while midfielders Josip Ilicic and Antonio Nocerino scored in three second-half minutes before Francesco Totti's late consolation.

Napoli dropped to fourth place on goal difference behind Juventus after losing 3-1 at Udinese, who climbed to ninth on 20 points.

Italy striker Antonio di Natale scored a hat-trick for the home side, the first a penalty, as Napoli trailed 3-0 after 57 minutes.

Marek Hamsik reduced the deficit but the Slovakia playmaker missed a 65th-minute penalty as Napoli fell to a fourth defeat this season.

Bottom club Bari were held 1-1 at home by fellow strugglers Cesena, while Brescia are outside the bottom thre only on goal difference after a goalless stalemate with visiting Genoa.

Second-bottom Lecce also have 12 points after a 3-2 defeat by Cagliari that moved the Sardinians up to 13th.

Bologna's home match against Chievo was postponed due to heavy snow.

Mallorca moved up to sixth with a 2-0 win at home Malaga, who missed a late penalty.

Athletic Bilbao beat Osasuna 1-0 in a mid-table clash to be 10th on goal difference behind Real Sociedad, who won 3-1 at Sporting Gijon.

Racing Santander moved away from the relegation zone with a 1-0 win over Deportivo La Coruna, joining their opponents on 14 points.

Hercules have one more point in 13th place, having beaten Levante 3-1 in a result that left the visitors just above the bottom four.