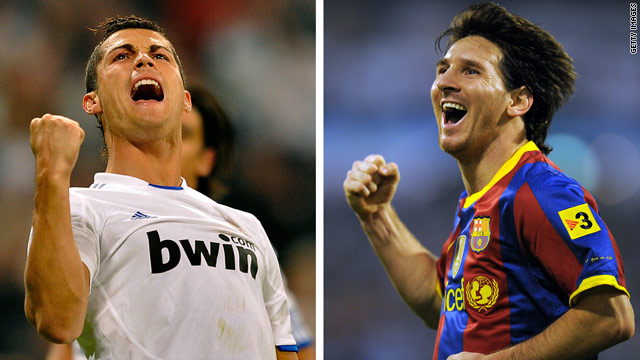 Cristiano Ronaldo (left) and Lionel Messi (right) are widely regarded as the two best footballers in the world.
STORY HIGHLIGHTS

(CNN) -- In-form superstars Cristiano Ronaldo and Lionel Messi go head-to-head in Monday night's El Clasico between Real Madrid and Barcelona in the Camp Nou, which is set to have a significant bearing on the Spanish title race.

The world's most expensive player Ronaldo scored a hat-trick in Real's 5-1 thrashing of Athletic Bilbao in their last league outing, which kept them one point ahead of Barca, who crushed Almeria 8-0.

Messi, the reigning FIFA world player of the year, also netted a hat-trick for the defending champions, who have beaten Real in their last four league meetings.

Ronaldo, who was on the receiving end last season as his team were pipped by the Catalan giants for the title, does not expect history to be repeated with his compatriot Jose Mourinho now in charge at the Bernabeu.

"It could be a decisive match as the two sides are so even and these games could decide the championship," the Portuguese told AFP.

"It would be difficult for the losing team to take.

"We are stronger than last season and we go into the match without losing a match and have a lot more confidence and solidity.

"The team looks really good and the coach has given us a lot of confidence."

Mourinho, like his Barcelona counterpart Pep Guardiola, has spent the pre-match build-up trying to downplay the significance of a victory for either side.

"The Clasico is obviously an important match because we will play against a direct opponent," he told the official Real Madrid website.

Blog: Are we in for the greatest El Clasico in history ?

"Nevertheless, whatever happens, 25 league games will still remain. I expect a beautiful game in which players help the referee and true football takes center stage," he added.

And this from Guardiola, who will be hoping his team can capitalize on home advantage to make it five wins in a row in the biggest derby match of all.

"This will not be decisive though, but whoever does win will surely be considered to be the champions for the next week at least," he told his club's official website.

Mourinho is guaranteed a hot reception in the Camp Nou, having been a former assistant coach there under Bobby Robson before embarking on his incredible managerial career.

"I don't see any coaches worrying about how they may be received. My concentration won't falter if the stands are against me. I don't care. I just want to play football and enjoy it. That's all," claimed Mourinho, who masterminded a Champions League semifinal victory over Barcelona as Inter Milan coach last season.

Both teams are expected to be a virtual full strength, with the home side having a doubt over Gaby Milito, who missed training Sunday, while Kaka remains sidelined for Real Madrid.

Ronaldo, who tops the La Liga scoring charts with 15, just ahead of Messi, claims the match is so much more than an individual battle between the pair.

"Talking about a duel between myself and Messi is nonsense," Ronaldo.

"I am just one player and I don't think I have more pressure than my teammates. We all have the responsibility to perform well.

Argentina ace Messi has scored in three out of their last four victories over Real, including a double in their 6-2 rout in the Bernabeu two seasons ago.

"Real will come to Camp Nou with revenge in mind," Messi told AFP.

"Since the 6-2 at the Bernabeu I guess they have a real desire to beat us and this season they have strengthened with the new signings and (Jose) Mourinho."

The return El Clasico will see Real entertain Barca on the weekend of April 16/17 in the title run-in.