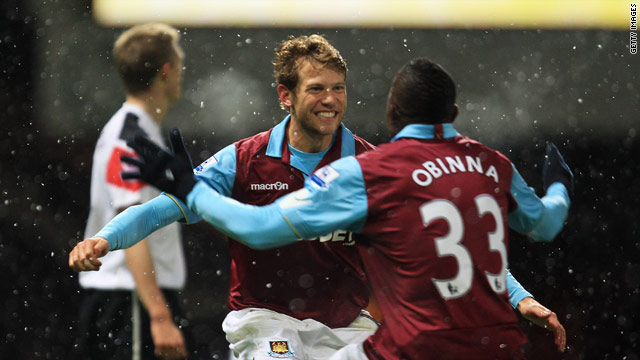 Jonathan Spector celebrates one of his two first half goals in the 4-0 win over Manchester United.
STORY HIGHLIGHTS
RELATED TOPICS

(CNN) -- English League Cup holders Manchester United crashed out in the quarterfinals of this year's competition as they were thrashed 4-0 at struggling West Ham on Tuesday night.

Former United player Jonathan Spector struck twice in the first half to give the Hammers the upper hand with Carlton Cole grabbing a second half double to seal victory for the English Premier League's bottom side.

United were denied a seventh-minute lead by the woodwork with Robert Green showing sharp reflexes to push Gabriel Obertan's shot onto the post, but that was as good as it got for Alex Ferguson's men, who have won the trophy for the past two seasons.

In Tuesday's other quarterfinal, also an all top-flight clash, Arsenal beat Wigan 2-0 at the Emirates Stadium, securing a last four passage through an Antolin Alcaraz own-goal and a second-half strike from forward Nicklas Bendtner.

Premier League leaders United made 10 changes from the team that had thrashed Blackburn 7-1 at the weekend and almost found themselves a goal down on 16 minutes when Nigeria forward Victor Obinna, on loan to West Ham from Inter Milan, saw his shot go in off Spector, who was in an offside position.

United States defender Spector had never scored before during his six seasons in English football, including a spell at Old Trafford, but a minute later he was on the scoresheet after connecting with Obinna's chip.

And in the 37th minute when Fabio slipped, Spector ran on to the loose ball to make it 2-0.

United looked to hit back and had the bulk of the possession in the second half, but Avram Grant's men went further ahead when Obinna's excellent cross was headed in by Cole in the 56th minute.

Wednesday's other quarterfinal clashes pitch Premier League pair Birmingham and Aston Villa into a local derby while second-flight Ipswich are at home to West Bromwich Albion, who are impressing in the Premier League this season.