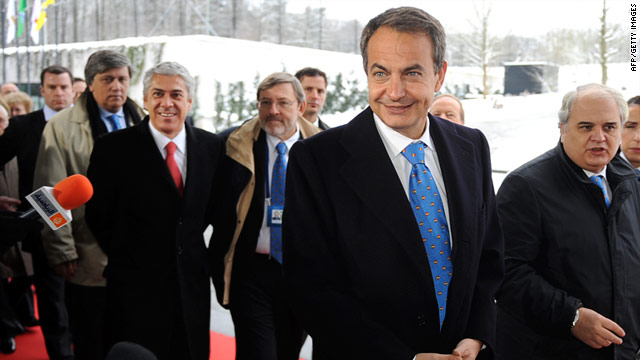 Speaking during his country Spain and Portugal's final presentation on Thursday to jointly host the 2018 World Cup, Villa Llona described reports against his organization as slanderous and said that it was "clean."

"Recently we have been criticized by many media outlets. Unfortunately for them FIFA is a clean institution," the 60-year-old said, just hours ahead of the vote to decide the hosts of the 2018 and 2022 tournaments.

"You have already heard enough slander in the media, the bidding process is clean regardless of what they say."

Two members of the executive committee and four other officials were suspended by FIFA last week following an investigation by British newspaper The Sunday Times.

This week the BBC's Panorama program claimed another three current executive committee members had accepted bribes more than a decade ago.

But in a passionate speech, with Spain's prime minister Jose Luis Rodriguez Zapatero and his Portuguese counterpart Jose Socrates in attendance at FIFA headquarters in Switzerland, Villa Llona denied that any of the now 22-strong committee were guilty of corruption.

"I love FIFA dearly but those I love the most are my colleagues in the ExCo," Villa Llona said.

"FIFA values honesty, FIFA works for football and for the world, and all my colleagues here present are all honest, hard-working football people and the people not here are also honest and hard-working."

The Iberian bid's three rivals -- Holland-Belgium, Russia and England -- also gave their final presentations at the FIFA headquarters in Zurich on Thursday.

England's bid -- which some believe has been damaged by the revelations in the British press -- was bolstered by speeches from prime minister David Cameron, soccer superstar David Beckham and Prince William.

The Russian delegation were without their prime minister Vladimir Putin, who on Wednesday complained of an unfair bidding process at FIFA, but the bid was injected with a touch of glamour after the arrival of model Natalia Vodianova and Olympic pole-vault champion Yelena Isinbayeva.

Meanwhile, underdogs Holland and Belgium rolled out Dutch footballing greats Johan Cruyff and Ruud Gullit to put their bid back in the spotlight.

The candidates for the 2022 World Cup -- Australia, Korea, Japan, the U.S. and Qatar -- gave their final presentations in Switzerland on Wednesday.