Barcelona shrug off travel chaos to stay top in Spain 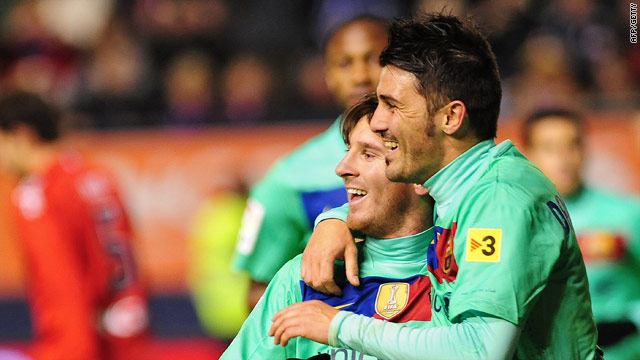 (CNN) -- Barcelona shrugged off a grueling last-minute journey to win 3-0 at Osasuna to maintain their advantage at the top of Spain's La Liga.

A strike by air traffic controllers left the champions stranded and they were initially under the impression that the game had been called off by the Spanish Football Federation (RFEF).

But the Catalan giants were then ordered to make the journey to Pamplona and embarked on a five-hour trek by rail and coach.

Pep Guardiola's squad arrived as the match was due to start and the kick off was delayed for 50 minutes.

"Barcelona have expressed their anger at the indecision of the RFEF as it has caused a real sporting disadvantage for the club. However, the club have accepted the decision and arranged an emergency trip," said a statement on their club website.

Guardiola stuck with the team which beat Real Madrid 5-0 in Monday night's Clasico at Camp Nou and was rewarded as Pedro Rodriquez put them ahead in the 26th minute.

Two second half goals for the brilliant Lionel Messi, the second a late penalty, sealed victory.

Real Madrid, who were home to fifth-placed Valencia in the late kickoff, responded with a 2-0 win to stay two points adrift of Barca.

Cristiano Ronaldo, overshadowed by Messi in the Camp Nou rout, made partial amends with two goals in the 72nd and 86th minutes to break the deadlock for Jose Mourinho's men.