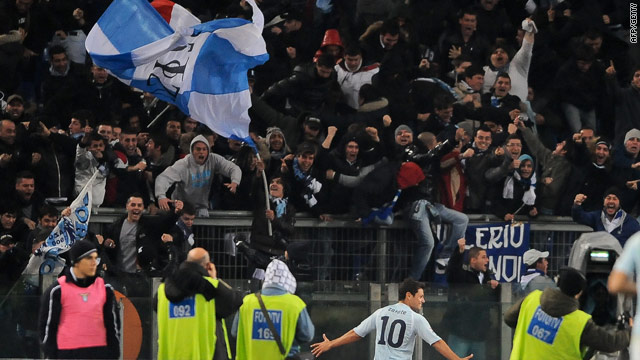 Lazio fans will be able to see their in-form team in action this weekend after a strike was called off.
STORY HIGHLIGHTS

(CNN) -- This weekend's Serie A program in Italy will go ahead after the players' union (AIC) and league officials signed a new agreement.

The AIC had said their players would strike after a breakdown of talks which centered on forced transfers and squad exclusions.

But late on Thursday it was confirmed a deal had bee struck and a new collective bargaining agreement will be signed next week.

A statement from AIC read: "The Association of Italy's Footballers (AIC), take into account the good work done for the new text of the collective agreement, with the mediation of the president of the FIGC (Italian football federation) Giancarlo Abete.

"And, having listened to the representatives of the teams, it announces that it has cancelled the action of protest and that the players of Serie A will go out on the pitch for the 16th round of games on December 11 and 12.

Gianni Petrucci, president of the Italian Olympic Committee, who were also involved in the negotiations, was pleased with the outcome.

"The decision to call off the strike of the Serie A players is an act of intelligence and merit," he said.

A meeting in Rome Tuesday paved the way for the new agreement with all the outstanding disagreements now resolved.

"Finally, we have tackled the issues and we are in agreement," said Italy's football league chief Maurizio Beretta.

The players' union has flexed its muscles several times in recent years, but the last Serie A strike was in 1996 over the Bosman ruling.

The lifting of the strike will mean that Lazio will travel to Turin this weekend to play Juventus, looking to build on their 3-1 victory over champions Inter in the 15th round and maintain their challenge to leaders AC Milan.

In-form Bologna host Milan, who will welcome back top scorer Zlatan Ibrahimovic, who was rested for the 2-0 Champions League defeat to Ajax this week.