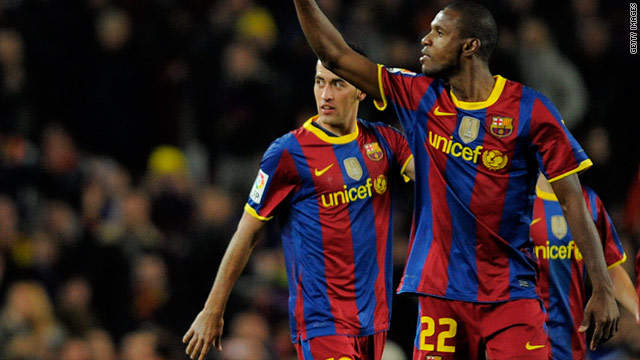 Barcelona's jerseys will be sporting the Qatar Foundation name after the announcement of a new sponsorship deal.
STORY HIGHLIGHTS
RELATED TOPICS

(CNN) -- Spanish football giants Barcelona have confirmed they have signed a huge new shirt sponsorship deal with the non-profit Qatar Foundation -- the first time they have received money to display a logo on their jerseys in the club's history.

Revealing the news on their official website, the Primera Liga champions could be in line to receive up to 170 million euros ($225m) for the five-and-a-half year deal, which incorporates commercial and image rights as well as various bonuses relating to success on the field.

Children's charity UNICEF has appeared on the club's shirts in recent seasons and their logo will continue to feature prominently.

However, kit manufacturer Nike will now redesign the jerseys to accomodate the name of the Qatar Foundation -- an organization set up in 1995 to improve education and community development in Qatar and the surrounding region.

Following the news, UNICEF released a statement, saying: "The groundbreaking partnership between UNICEF and FC Barcelona advanced the global message on the importance of children's issues in a unique way.

"UNICEF is looking forward to the next stage of the collaboration and is exploring various options."

Barcelona also released a breakdown of how the funds will be received, with the club getting 15m euros ($20m) for the second half of the season and 30m euros ($40m) for each of the following five seasons -- with up to 5m euros ($7m) in bonuses for any titles won.

The funds will provide a welcome boost for Barcelona, who have struggled financially, despite all their successes on the pitch.

The Catalan club made a loss of 80m euros ($105m) last season and are reported to have debts in the region of 440m euros.