Five-star Barcelona stay ahead of Real 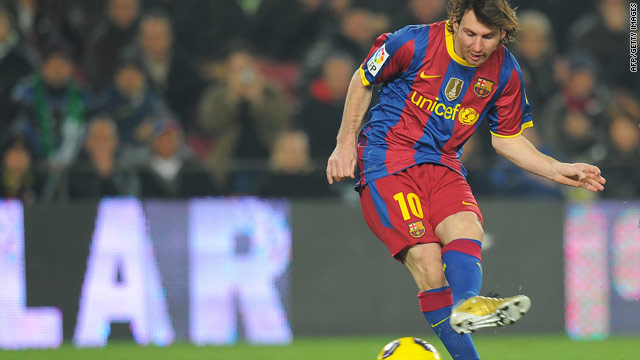 Lionel Messi scores one of his two goals as Barcelona produced another sensational display against Sociedad.
STORY HIGHLIGHTS
RELATED TOPICS

(CNN) -- Barcelona remain two points ahead of Real Madrid at the top of Spain's Primera Liga after producing another stunning performance to thrash Real Sociedad 5-0.

David Villa opened the scoring for Barca when converting Pedro's eighth-minute cross and Andres Iniesta doubled the advantage when firing home from a tight angle.

Lionel Messi combined with Daniel Alves to score the first of two superb individual goals just after the break and the little Argentine helped himself to another before substitute Bojan completed the rout in the final minute.

The win was vital for Pep Guardiola's side, who had briefly lost top spot after Madrid's 3-1 win at Real Zaragoza earlier in the evening.

Mesut Ozil cut in from the right to open the scoring and Cristiano Ronaldo made it 2-0 with a trademark curling free-kick.

Angel Di Maria added a third before Gabi Fernandez pulled a goal back from the penalty spot after Nicolas Bertolo had been brought down in the area by Ricardo Carvalho.

Villarreal remain third despite Saturday's last-gasp 1-0 defeat at Getafe. However, they are now 10 points off the lead.

Fourth-placed Espanyol failed to close the gap after losing 2-1 to Athletic Bilbao, while fifth-placed Valencia are now a remarkable 16 points behind leaders Barca ahead of their home match against Osasuna on Monday.