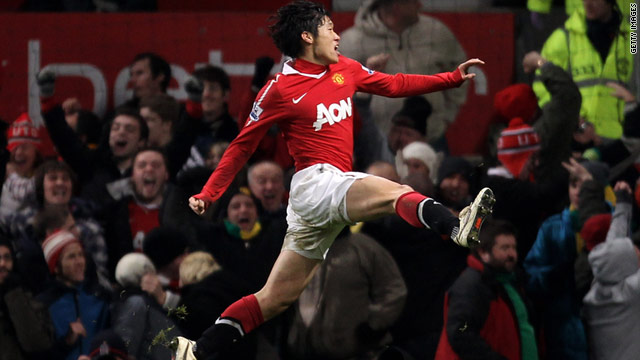 (CNN) -- Manchester United have returned to the top of the English Premier League after a header from Ji-sung Park gave them a narrow 1-0 win over previous table-toppers Arsenal.

The only goal of a largely disappointing match came just before half-time when Park superbly adjusted his body to divert Nani's deflected cross past 20-year-old Arsenal goalkeeper Wojciech Szczesny, who was making his league debut for the London side.

Neither team found their top form in a game of mistimed passes and niggly tackling, but United had the best of the chances with England striker Wayne Rooney missing a golden opportunity to stretch the advantage in the 73rd minute.

Arsenal defender Gael Clichy was adjudged to have handled the ball in the penalty area but Rooney's spot-kick flew high and wide of the visitors goal.

Gunners manager Arsene Wenger brought on big-name players Robin van Persie and captain Cesc Fabregas, who was returning from injury, in an attempt to get back into the game.

But their flowing passing football deserted them and it was United who nearly snatched a second goal late on, when Rooney's clever lob was superbly clawed away by Szczesny.

The result means United now lead the table by two points on 34 points and remain unbeaten after 16 league matches. They also have a game in hand on all their rivals.

Arsenal are two points behind in second, level on points with Manchester City, while defending champions Chelsea are another point behind in fourth position.