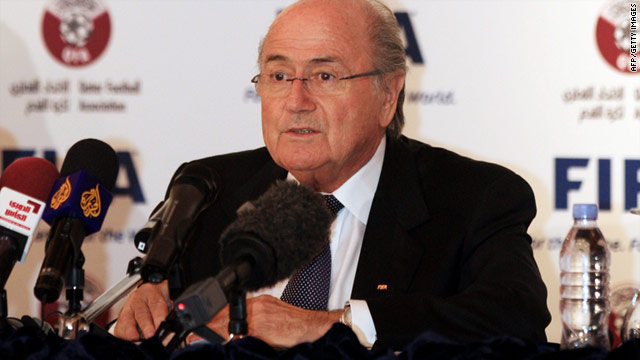 Sepp Blatter has said sorry for making comments about gay fans going to the World Cup in Qatar.
STORY HIGHLIGHTS

(CNN) -- FIFA president Sepp Blatter has apologized for his remarks about gay fans attending the 2022 World Cup in Qatar.

Blatter was heavily criticized for saying they should "refrain from sexual activity" if they go to Qatar because homosexuality is illegal in the emirate.

"It was not my intention and never will be my intention to go into any discrimination," he told a press conference in Abu Dhabi Friday.

"If somebody feels hurt, then I regret and present apologies," added Blatter.

The original remarks were made Monday in Johannesburg and the 74-year-old was quick to add that "in football we have no boundaries.

If somebody feels hurt, then I regret and apologize
--Sepp Blatter
RELATED TOPICS

Blatter went on: "We open everything to everybody and I think there shall not be any discrimination to any human beings."

But despite the qualification, his comments provoked fury among gay rights groups.

Blatter, in Abu Dhabi for FIFA's Club World Cup, also gave his support to the notion of the 2022 World Cup being played in January rather than the traditional mid-summer slot.

The move, to avoid the blistering 50 degrees centigrade heat in Qatar in June and July, was first suggested by Germany's FIFA executive committee member Franz Beckenbauer and is gathering momentum.

"I definitely support (the idea) to play in winter here," Blatter said.

"It is important to play when the climate is appropriate and I'm thinking about the footballers, not only the fans but the actors."

Organizers in Qatar have said they will provide air-conditioned stadiums and training grounds to combat the stifling heat.

They have not made an official request to switch dates which would bring clashes with major club leagues in Europe such as the English Premier League, Spain's La Liga and Serie A in Italy.