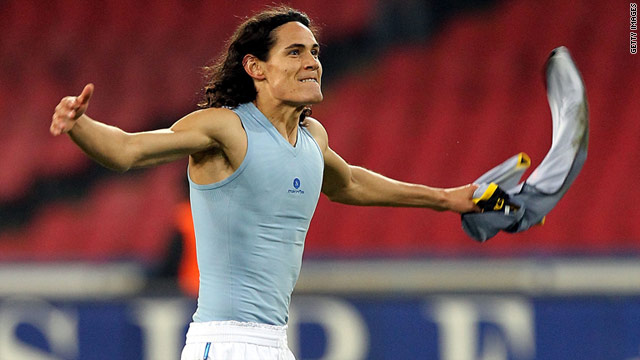 (CNN) -- Lazio and Napoli have closed the gap on Serie A leaders AC Milan to just three points after victories on Sunday.

Napoli have Edinson Cavani to thank for their 1-0 win over Lecce.

A game that was heading towards a goalless draw was transformed when the 23-year-old Uruguayan striker lashed a 25-yard shot into the top corner in the 91st minute.

The win means Napoli move up to second place in the table.

Serie A leaders Milan crash at home to Roma

Lazio overcame Udinese 3-2 in a thrilling match to move up to third in the table.

Hernanes opened the scoring for Lazio after just two minutes before Alexis Sanchez hit back for the visitors five minutes after the break as he headed past goalkeeper Fernando Muslera.

But parity was short-lived as Giuseppe Biava restored the home side's advantage when he volleyed home in the 52nd minute.

But German Denis leveled the scores again nine minutes later, and that's how it looked as though it would end with Udinese claiming a vital away point.

But an own-goal in the 88th minute by the Colombian defender Cristian Zapata dashed the visitor's hopes and ensured Lazio remain right in the hunt for the title as Serie A heads into its winter break.

Juventus, meanwhile, slip down to fourth place after they could only draw 1-1 away to mid-table Chievo.

A stunning overhead kick by Fabio Quagliarella gave the visitors the lead in the 31st minute after Michele Marcolini had earlier missed a penalty for Chievo.

And despite having midfielder Manuel Giandonato sent off early on in the second half Juventus remained more ominous in attack despite the numerical disadvantage.

But they were denied victory when Sergio Pellissier scored an equalizer in injury time.

In the other Serie A games, Parma and Bologna played out a goalless draw at the Stadio Ennio Tardini, while sixth-placed Palermo could only draw 1-1 with bottom of the table Bari.

Catania move up to 11th in the table after a 34th minute strike from Argentine striker Maxi Lopez gave them a 1-0 win over Brescia.

The match between Sampdoria and Genoa was postponed due to snow.