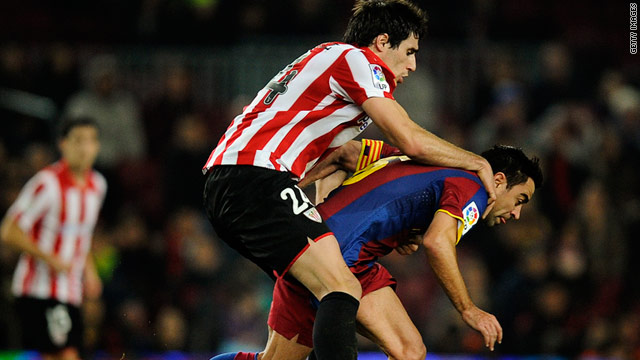 Barcelona midfielder Xavi cannot escape his marker as Bilbao came away from the Nou Camp with a battling 0-0 draw.
STORY HIGHLIGHTS
RELATED TOPICS

(CNN) -- Spanish champions Barcelona were held to a battling 0-0 draw by Athletic Bilbao in their Spanish Cup last-16 first-leg tie at the Nou Camp on Tuesday night.

Pep Guardiola's side came into the match in a blistering run of form which had seen them score 20 goals in their last five matches -- and were seeking their 11th consecutive win in all competitions.

However, despite Guardiola selecting a strong line-up, Bilbao defended superbly to become only the second team this season to prevent Barcelona from scoring.

Despite their failure to score, a 1-1 draw in the return leg at San Mames in two weeks' time will see Barca qualify for the quarterfinals on the away goals rule.

The winners of the tie, which is a repeat of the 2009 final which Barca won 4-1, will face Getafe or Real Betis for a place in the last four of the competition.

Elsewhere in the Spanish Cup, Deportivo La Coruna are favorites to reach the last eight after a 1-1 first leg draw at Cordoba, while the late game between near-neighbors Valencia and Villarreal also ended in a 0-0 draw.

Meanwhile, Schalke and Hoffenheim have reached the quarterfinals of the German Cup after last-16 wins on Tuesday.