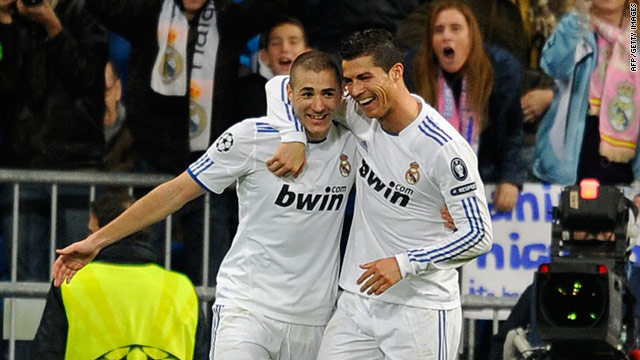 Jose Mourinho's side, who have not won this cup competition since 1993, scored four goals in each half to make the second leg in January a formality.

Mezut Ozil and Pedro Leon, who added the final goal in the 90th minute, were also on target as Mourinho's near full-strength side ouclassed their opponents.

Real could face Atletico Madrid in the quarterfinals after their city rivals took a narrow 1-0 first-leg lead into the second leg against Espanyol, despite the first-half dismissal of former Spain international Jose Antonio Reyes.

Atletico secured the win courtesy of a 33rd-minute penalty from Portuguese midfielder Simao Sabrosa, who is expected to join Turkish club Besiktas in the January transfer window.

However, the capital club had to play most of the match with just 10 men after Reyes was sent off three minutes before the interval for a head-butt.

On a night of plenty of goals, Romaric scored twice as Sevilla beat Malaga 5-3 in their first-leg match, while a hat-trick from Argentine striker Leonardo Ulloa helped Almeria edge Real Mallorca 4-3 in another thiller.

Getafe take a 2-1 advantage into the home leg of the La Liga club's tie against second division Real Betis.