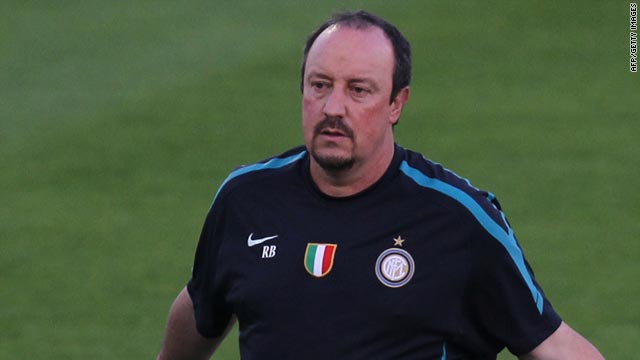 (CNN) -- Rafael Benitez's reign as coach of Inter Milan has lasted only six months after the European champions terminated the Spaniard's contract on Thursday.

The 50-year-old's position has been in doubt since last Saturday when he demanded that the Italian club's owner Massimo Moratti back him with support in the January transfer window.

Following Inter's Club World Cup final success in Abu Dhabi, Benitez angered Moratti when he criticized the board for not investing in new players after he took over from treble winner Jose Mourinho in June.

He leaves with Inter through to the second round of the Champions League, but languishing seventh in the Serie A table -- 13 points behind leaders and city rivals AC Milan.

"F.C. Internazionale and Rafael Benitez wish to convey that, together and with mutual satisfaction, they have reached an agreement for the early cancellation of their working partnership," the Serie A side said in a statement on its website.

"F.C. Internazionale would like to thank Rafael Benitez for his work in charge of the team, which he guided to success in the Italian League Super Cup and in the FIFA Club World Cup."

Benitez received a reported $6 million payoff when he left English club Liverpool on June 3, and is now expected to receive more compensation for the rest of his two-year deal with Inter.

His agent was in talks with Inter this week, as Moratti initially refused to comment on Benitez's future.

The club statement said Benitez "would like to thank F.C. Internazionale for the important professional experience and for the victories achieved together."

Benitez has been back in England this week during the Italian season's winter break, as he still owns a house in Liverpool.

"I think the club's dream coach would be Luciano Spalletti, but he is at Zenit St Petersburg on a huge contract so that's not going to happen," said Marcotti.

"Right now, the front runner seems to be Leonardo, who managed AC Milan last year. He's a very intelligent guy, who found the influence from above a little too much at Milan.

"Inter are run differently from Milan and I would welcome his possible appointment. I think it would be a progressive choice."