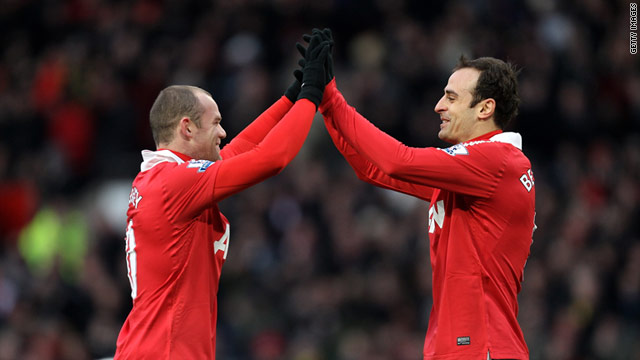 (CNN) -- Manchester United stayed top of the English Premier League as two goals from Dimitar Berbatov secured a 2-0 home win for the Red Devils over Sunderland on Boxing Day.

United, unbeaten this season, have 37 points from 17 games, with City on 35, but having played two games more. Third and fourth-placed Arsenal (32 points) and Chelsea (31 points) play each other in a crucial match on Monday.

Below-strength Sunderland were no match for Alex Ferguson's high-flyers at Old Trafford and were behind after just five minutes.

Football's heroes and villains of 2010

United might have been further ahead with Rooney a constant menace, while a shot from Anderson hit the woodwork.

We are getting that consistency, particularly in our defending. These are good signs for us
--Alex Ferguson
RELATED TOPICS

But Berbatov sealed the three points after the break as his shot took a massive deflection off Anton Ferdinand.

United manager Alex Ferguson was delighted by the performane of his table-toppers.

"Dimitar could have scored four or five today," he told Sky Sports.

"He had some terrific opportunities."

"We are getting that consistency, particularly in our defending. These are good signs for us."

Big-spending City made a dream start at St James' Park and were ahead after just two minutes as home goalkeeper Tim Krul saw his clearance intercepted by Carlos Tevez, who found Gareth Barry to score.

Tevez grabbed the second on five minutes, capitalizing on another defensive error to score from a James Milner pass.

Andy Carroll pulled one back for Newcastle late in the second half, but Tevez sealed the three points as his shot was diverted into his own net by Fabricio Coloccini.

Tottenham Hotspur beat Astpn Villa 2-1 in the late game to maintain their challenge in fifth place on 30 points from 18 games.

Rafael van der Vaart scored twice for Tottenham, who were forced to play for over an hour at Villa Park with 10 men after Jermain Defoe sent off for elbowing James Collins as they contested a high ball.

Marc Albrighton pulled one back late on for Villa, but Tottenham completed the double over Gerard Houllier's men.

Bolton are in sixth after seeing off West Brom 2-0.