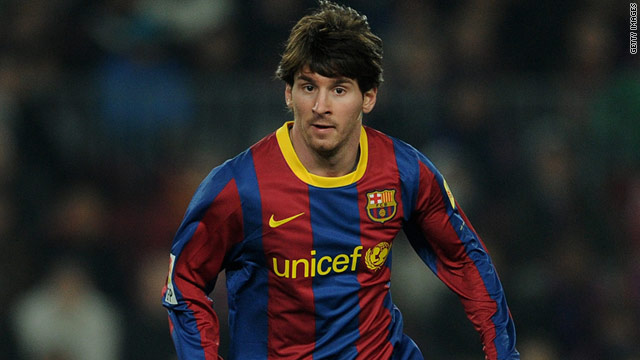 Leo Messi has missed only three matches so far this season as Barcelona have marched to the top of the Spanish standings.
STORY HIGHLIGHTS
RELATED TOPICS

(CNN) -- Spanish champions Barcelona will kick off 2011 without the services of world player of the year Lionel Messi and key defenders Carles Puyol and Gerard Pique.

Coach Pep Guardiola has given top scorer Messi permission to miss Sunday's home clash with Levante as his side seek to move five points clear of second-placed rivals Real Madrid in the La Liga standings.

The club's website reported on Friday that the Argentina forward had been allowed to extend his holiday, so will be missing from the line-up for only the fourth time this season.

Captain Puyol is ruled out with a groin injury that he picked up playing for Catalonia in the representative game against Honduras earlier this month, and may also miss next weekend's trip to Deportivo La Coruna.

His central defensive partner Pique is suspended after picking up his fifth yellow card this season in Barca's final league game of 2010, the 5-1 thrashing of city rivals Espanyol on December 18.

However, Guardiola will be able to call on Argentine defender Gabriel Milito and young midfielder Jeffren Suarez, who have both returned to training.

Milito had been sidelined since injuring his thigh in the Spanish Cup win over Ceuta on November 10, while the 22-year-old Jeffren suffered a groin problem in the Champions League match win over Rubin Kazan on December 7.

Meanwhile, Jose Mourinho's Real Madrid will return to action on Monday with a trip to seventh-placed Getafe.

The capital club's website reported that 5,000 fans turned up to watch the squad return to training on Thursday.

"I had never been in a session attended by so many people," Real's former Getafe winger Pedro Leon said.

"We thank the fans for their support and we ask them to continue supporting us. I hope we can thank them by winning a title at the end of the campaign."

Spain's top two clubs will also line up in midweek for the second leg of the Spanish Cup last-16 ties, with Barca away to Athletic Bilbao and Real traveling to Levante.

Bilbao will be hoping to pull off a shock after earning a 0-0 draw at Camp Nou this month, but Levante have little chance of overturning an 8-0 first-leg deficit.