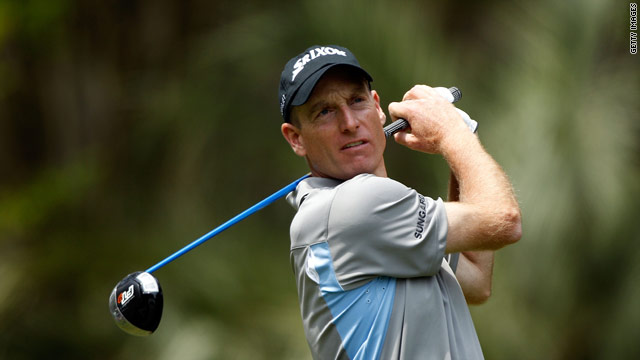 The tournament was decided in bizarre fashion when Englishman Davis informed officials he had clipped a reed during his backswing at the first play-off hole, and was handed a two-stroke penalty.

It proved costly for Davis, who finished with a final score of 10-under and is still waiting for his first PGA Tour title. Meanwhile, Furyk moved into the top five of the world rankings after he carded 13-under to secure his 15th victory on the tour.

I feel bad for him [Davis]. It was too good a battle to end that way.
--Jim Furyk
RELATED TOPICS

It was a disappointing conclusion for 35-year-old Davis, who sank an 18-yard putt on the final green to force the tournament into an extra hole.

It was the same hole that proved his undoing in the play-off when his approach shot rolled off the green and onto the rocks.

Davis played the ball onto the green with his next shot but then summoned over rule officials because he thought he may have touched the reed during his swing.

The subsequent two-stroke penalty meant Furyk was able to secure victory with a par, holding a six-foot putt to conclude proceedings.

"It's not the way I wanted to win the golf tournament. It's admirable what (Davis) did," Furyk told PGAtour.com.

"I feel bad for him. It was too good a battle to end that way."